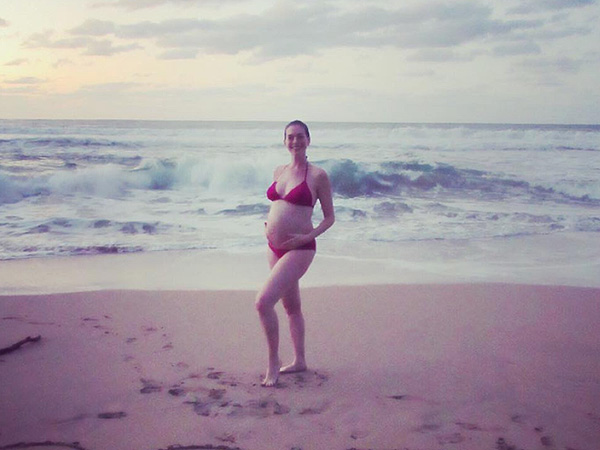 Soon-to-be new mom Anne Hathaway showed off her bikini baby bump in effort to fight back against looming paparazzi. The 33-year-old first time mother was enjoying a day at the beach when she noticed photographs being taken as she enjoyed the surf and sun. Being that Anne is a smart and savvy woman, she took matters into her own hands.

Hathaway posted the image of beautiful baby belly while she was wearing a red bikini on her Instagram with an explanation, “So, posting a bikini pic is a little out of character for me, but just now while I was at the beach I noticed I was being photographed,” Anne noted with the bikini baby bump pic. “I figure if this kind of photo is going to be out in the world it should be an image that makes me happy (and one that was taken with my consent. And with a filter :)”

The ‘Interstellar’ actress and her husband, 34-year-old Adam Shulman, are expecting their first child. Rumors hit the net in November, but this marks Anne’s first official confirmation of her pregnancy. A source told People, “Anne hasn’t really slowed down at all. She was always very active and likes to be out and about. Nothing seems to have changed after she got pregnant.” In fact, the source added, “the only difference is that she looks even happier than before.”

By posting the photo of her baby bump, she beat the paparazzi to the punch. You go girl!

How to Deal with Exhaustion During the Newborn Stage