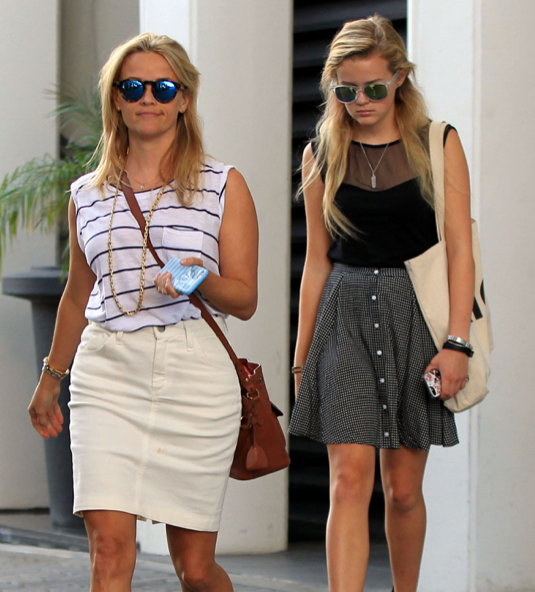 Reese Witherspoon and her daughter Ava were seen leaving her office in Beverly Hills, California on Wednesday (July 29).

The Wild actress was dressed in a striped sleeveless tee shirt and cream beige jean skirt. Her daughter kept a low profile while lowering her head as followed behind.

In a new interview with People Style Watch, Witherspoon admits she has been her feeling good inspiration comes from her grandmother Dorothea Draper.

“She was just sort of this quintessential Southern lady. She didn’t leave the house without feeling somewhat put together. That doesn’t mean she was dressed to the nines at all moments, but she pulled herself together and her presentation to the world was like, ‘I’ve got my stuff together.’ But it’s a good lesson as a young person: It doesn’t matter what’s going on in your life, but you’ve got to show your best self to the world,” she told.

Witherspoon’s lifestyle brand, Draper James was named after her grandmother.