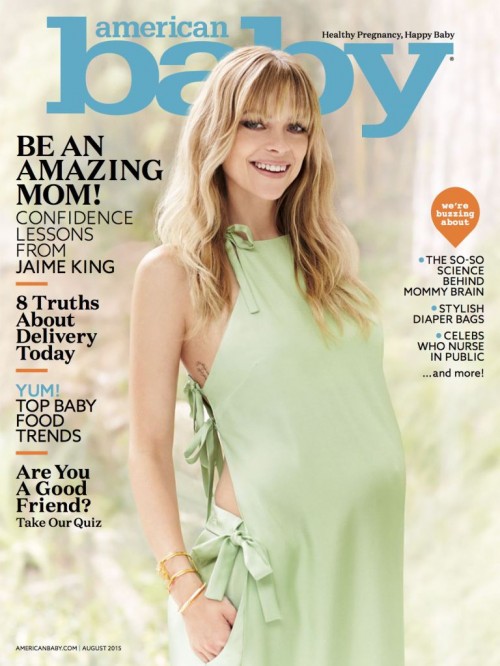 Jaime King stuns while showing off her baby bump on the cover of the August issue of American Baby.

For the feature story, the Hart of Dixie actress opens up about her second pregnancy, and life with husband Kyle Newman and their 21-month-old son James.

One of the most surprising thing about being pregnant was learning that taking time off from her job was not a real option.

“Finding out that my job [starring on Hart of Dixie] considered my pregnancy a disability. I was like, ‘I can’t take three months off without getting paid. I have a child to support.’ I went back to work after six weeks. It was really difficult trying to navigate that. I realized I was living in a world that so many other working moms are living in,” she confided.

King says like other pregnant women she has experienced body-shaming.

“I know what it feels like to be body-shamed. People have made comments about how I’m too thin and need to eat a sandwich. I’ve seen it happen with other pregnant women in this business too – we’re either too thin or put on too much weight. But every woman’s body is different…all that matters is that you’re taking care of the nutrition for yourself and your child. So don’t let other people get you down, and don’t put other women down either,” she explained.

The mom-to-be also explained her maternity style is all about making herself feel good.

“Most either go boho and wear long flowy dresses like they’re going to the beach, or they throw on sweatpants because the feel like crap. To me, pregnancy is the ultimate symbol of womanhood, beauty and sensuality, so make it a celebration of creating life. You don’t have to hide anything or try to suck in your belly. Why not put on things that are tighter, flashier, or more fun? Wearing formfitting clothes totally counteracts that voice inside of us that says, ‘Ugh, I just want to lie down all day and sleep.’ I feel it’s really important to feel good about yourself, and fashion is part of that,” King told.

“I asked myself, ‘God forbid anything happened to me, would she take care of my child as if he were her own? What kind of morals would she instill? Will she be backup support if for any reason my child doesn’t want to come to me for something?’ I looked for giving people whom I admire, and those two give more than anyone I’ve ever met,” she said.

To read the full interview pick up American Baby on newsstands.

Celebrity Kids Who Look Just Like Their Famous Mom