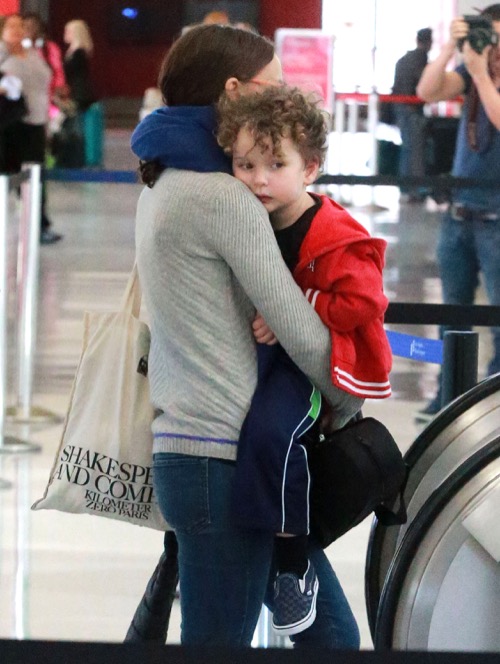 Natalie Portman and her son Aleph Portman-Millepied were photographed leaving LAX Airport after the Oscars, likely to join Natalie’s husband, Benjamin Millepied, back in Paris. Even though Natalie Portman didn’t present any awards or get nominated for anything at this year’s Oscar, she did make an appearance at the Vanity Fair afterparty, the star-studded affair that is carefully curated by the Vanity Fair staff.

Natalie Portman is also currently in post-production for her film, Jane Got A Gun, which had some difficulties during production. But from what all the sources are currently saying, the film is looking fantastic, and Natalie looks like she could have another hit on her hands.

There are also some rumors circulating about Natalie being pregnant again. It’s been three years since she gave birth to Aleph, and she’s always spoken about her desire to have multiple children. In addition to that, Natalie’s largely stayed away from the media craziness that’s surrounded celebrity children, and she, Aleph, and Benjamin have been living a quiet life in Paris. However, it is clear that living in Paris and not being able to take a meeting every other day might have had a negative impact on her career, since she did fly out all the way here just to network with industry folks. But it’s Natalie Portman – let’s be real, how much of a downswing can she really have? She’s in a studio franchise, she’s an Oscar winner, and she’s got her pick of projects. And if the rumors are true and she is pregnant, that’s another swath of solid publicity coming her way, even if it prevents her from shooting anything for the next year.

What do you guys think? Is Natalie Portman pregnant, or has she just been lying low and taking a break? Let us know your thoughts in the comments below.

Kelly Clarkson: I Never Thought I Was Going to Be a Mom