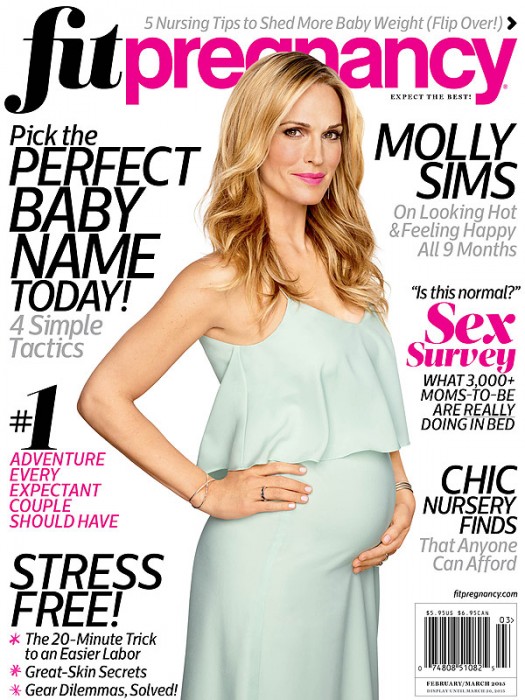 Molly Sims covers the February / March issue of Fit Pregnancy while showing off her growing baby bump in a light blue summer dress.

The model talks about having her first child later in life, becoming a mom, and her second pregnancy.

“I would have been a good mom earlier, but I didn’t find my prince until I was older,” Sims who welcomed her first child, Brooks, at the age of 39. “I don’t regret starting later — everything I’ve wanted to do, I’ve done. I lived in Europe for six years, waitressed, worked at a book company and in a law office.”

Although, Sims admits her age has played a factor in her pregnancies.

“I’m 41, so I had an ultrasound and blood tests to make sure everything was okay,” she explains. “We waited until we got the results at 14 weeks to tell anyone, but my in-laws came to visit early on and they said I looked green!”

The author’s second pregnancy has been relatively easier than her first.

“I had a difficult time with Brooksie. First, I had a velamentous cord insertion [when the umbilical cord inserts into the fetal membranes rather than the middle of the placenta, causing a higher risk of rupture],” she explains. “The doctor monitored me closely throughout the pregnancy, and I had a scheduled c-section to protect the cord, which was necessary, but disappointing.”

Sims is not opposed to giving birth naturally this time around.

“This time, I don’t have the same condition, so I’m not opposed to a [vaginal birth]”

Breastfeeding is something Sims would like to do, but has accepted the fact she may not be able to.

“When Brooks was born, my milk never came in, and I tried to breastfeed for three months. I felt awful and ashamed. I wanted to breastfeed because it’s so good for the baby, so I worked with a lactation specialist,” she recalls. “After three months, she said, ‘You’re done. You don’t have any milk.’ I’ll try breastfeeding again, but if it doesn’t work, I won’t push it.”

Pick up Fit Pregnancy on newsstands now to read the complete interview.

Gwen Stefani Jets Off With Apollo