David Beckham: I’ve Become a Taxi Driver For My Kids 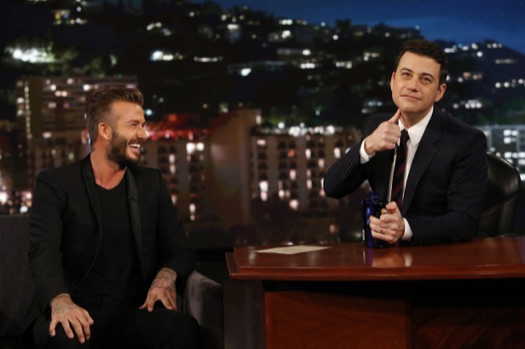 David Beckham stopped by Jimmy Kimmel Live on Wednesday, to talk about his life with Victoria Beckham and their four children since his retirment from professional football in 2013.

“My little girl turned ’round to me the other day,” he told of his 3-year-old daughter Harper.  “I’d just bathed her and I was in the bath as well, so I got her out and you know, I was toweling her down and she said, ‘Daddy, I love you so much but I don’t like you, you’re so chubby!’ I mean, I didn’t think I was!”

While not modelling underwear for H&M, Beckham admits he has become the chauffeur in his family.

“To be honest, I’ve become a taxi driver overnight with the kids,” he said. “I’m literally an Uber driver now. I take them from seven in the morning to the schools — I have four drop-offs at four different schools — so I get that done in an hour and fifteen minutes. Then I pick my little girl up at 12, and then the boys at four, and then the boys train in a soccer academy every single night of the week so I’m busy every night until 9:30 and then I’m at home.”

Beckham insists he is enjoying the quieter life.

“It’s great,” the former Manchester United star said. “I’ve been playing football for the last 22 years, not always with the family, of course, I travel a lot. It’s nice to actually be at home and spend some time with them and be a taxi driver.”

For the most part his children Brooklyn, Romeo, Cruz and Harper are enjoying having him around more.

“The younger one obviously loves me taking her to school,” he began. “The two smaller boys, they love it, apart from my middle son Romeo, who’s 12, he’s just started — as soon as I take him into school, I’ll go to kiss him and he’ll turn his cheek. I will then pick him up and give him a bear hug and kiss him in front of his friends”

“That happens with him and then my eldest, Brooklyn, who’s 16 in March, I take him to school and he says to me, ‘Daddy, park around the corner.’ Sorry, ‘Dad, park around the corner,’ not Daddy, he’s passed that,” Beckham continued. “He tells me to park him around the corner, and then he gets out and he walks ’round to his school. He did it to me the other day after doing it about five times on the trot, so I’m driving around and he’s just walking in his school, and I open the window and I said, ‘Brooklyn! I love you!’ Obviously it didn’t go down very well.”

Beckham and Victoria married in 1999. They currently live in London.