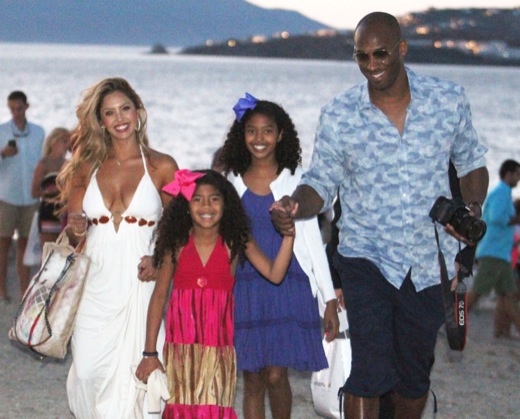 Kobe Bryant, his wife Vanessa and their daughters Natalia & Gianna were spotted enjoying a day out while vacationing in Mykonos, Greece on Tuesday (June 24).

Taking a much needed rest after a serious injury during the NBA season, Bryant was all smiles while enjoying a day of jet skiing, shopping, and indulging in ice cream. He posed for pictures and asked someone to take a picture of him and his family.

Bryant is most likely keeping up to date with the FIFA World Cup while on vacation. He is a huge fan of the sport.

“Well you know growing up in Italy from the age of 6 to 14, at the time Serie A – that was the best league in the world. All the best players were there; Maradona was there, Baggio was there, Van Basten was there. So when I was growing up that became a passion of mine so I was literally playing football every single day,”  he told Anderson Varejao of ESPN when describing his passion for the game.

So, who does Bryant think will make the finals? He feels Brazil and Argentina have a good chance of making it.

8 Household Chores To Avoid During Pregnancy