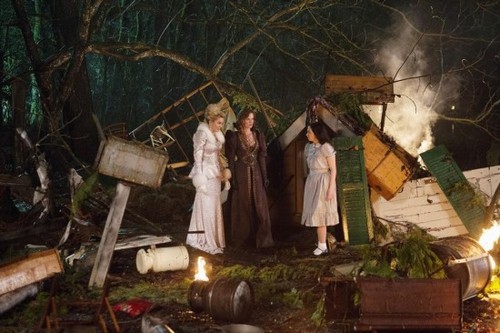 Our favorite fantasy drama ONCE UPON A TIME IN WONDERLAND returns tonight to ABC with a new episode called, “Kansas.”  On last week’s episode Zelena threatened to kill Henry if Hook – whose lips had been cursed by the Wicked Witch — didn’t proceed with kissing Emma, which would drain all of her magical powers away, and things began to heat up between Regina and Robin Hood.

Meanwhile, back in the Fairy Tale Land that was during the past year, Snow and Charming went in search of Glinda, the Good Witch of the South, to see if she could help them defeat Zelena, and the curse that will ultimately send the Fairy Tale characters back to Storybrooke is casted — but from an unlikely source. Did you watch last week’s episode? If you missed it we have a full and detailed recap, right here for you.

On tonight’s episode with Mary Margaret in labor and due to give birth at any moment, the residents of Storybrooke go on high alert in an attempt to ensure that Zelena doesn’t try to steal her newborn baby for use in her ultimate game plan to turn back time and change her destiny — while obliterating Regina’s existence. Meanwhile, in the Land of Oz of the past, Glinda tries to convince Zelena to fight her evil tendencies and join her and her sister witches as a protector of Oz. But the appearance of a young girl from Kansas could turn out to be her undoing.

Tonight’s season 3 episode 20 looks like it is going to be as magical as ever so make sure that you tune in and also join us for our coverage for ABC’s hit show at 8:00 PM EST! While you wait for our live update hit up the comments section and let us know what you think of the episode!

ONCE UPON A TIME SEASON 3 EPISODE 20 LIVE RECAP, CLICK HERE …