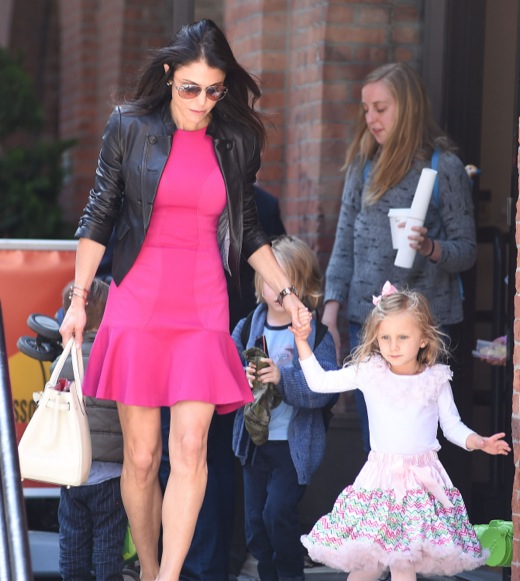 Bethenny Frankel was spotted picking up her daughter Bryn in New York City on Thursday (May 29).

The Skinny Girl mogul was dressed up in a bright pink dress which she accessorized with a leather jacket and shiny heels. The 4-year-old wore a frilly top and matching skirt on the way to their waiting car.

Earlier in the day, Frankel signed copies of her book Cookie Meets Peanut at day 1 of the 2014 Bookexpo America at the Jacob K. Javits Convention Center. The book, which is “inspired by her own life about two siblings — a new baby and one diva dog,” is due out in September.

Frankel is going through a messy custody battle with ex Jason Hoppy. On Wednesday, the TV personality took the stand for the first time in the custody case.

Struggling to hold back tears, she relived her painful divorce proceedings.

“Jason said to me, ‘Get ready, we are going to war. It’s over. We’re done,” Frankel recalled. “He would leave the house in shambles. There would be dishes everywhere. He would pee and poop and leave it in the toilets. He would hold Bryn, and he would say, ‘You’re finished, you’re done. I’m going to ruin you.'”

Frankel and Hoppy split in December 2012.

Teri Hatcher Buys a New Car For Her Daughter