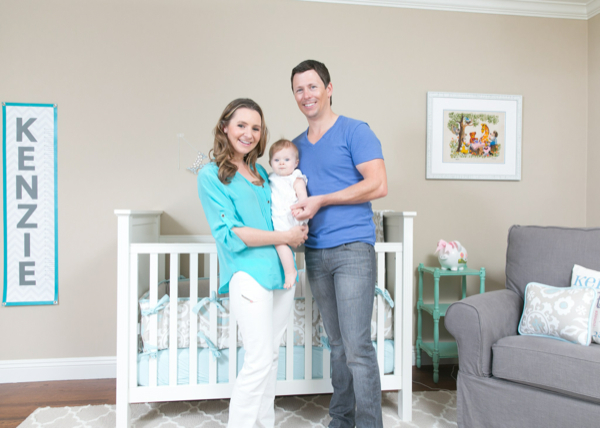 Every mom-to-be wants the perfect nursery.

“Bill and Scout are like my baby whisperers. I had no idea where to start and what I needed and they totally came in and just took over and made sure we had everything we needed. They not only helped design the room, they also put the room together and handled the delivery of everything while I was at the hospital giving birth!” she told of the duo who have also designed Tori Spelling’s baby nurseries. 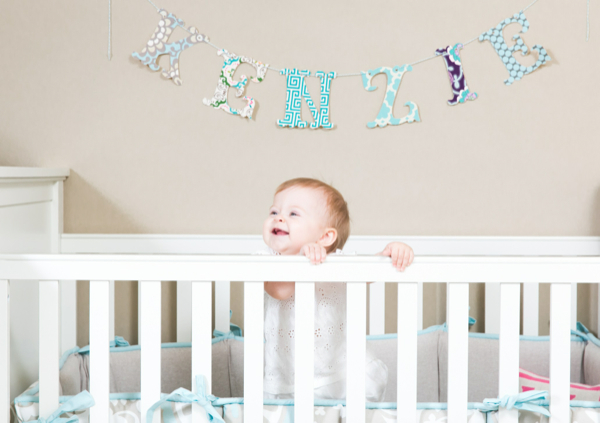 The 7th Heaven knew she wanted something different than the typical pink themed baby girl nursery.

“I wanted something that was more neutral and calming. I am not so much of a pink girl, but I love aqua so we went more for a tranquil nursery. I hunted Pinterest and came up with a theme from there,” she revealed.

Like most expectant moms, Mitchell spent endless hours searching for the perfect bedding. She ended up choosing Carousel Designs, a contemporary baby bedding company that allows parents to design and create their own virtual nursery online with their Nursery Designer.

“Carousel Designs was just amazing, they have so many great styles to choose from! If anything trying to narrow down the choices was the tough part. I fell in love with the Taupe Suzani print and instantly started designing the room around that.  I love that it is so tranquil and serene and I also wanted Michael to be comfortable in the room and not overwhelmed by pink,” she told.

Mitchell also chose to place keepsakes from her and Cameron’s own baby rooms in Kenzie’s nursery.

“One of the needlepoints was in my nursery, my great grandmother, Memo, made it for me. I wanted something from our childhood in her room,” she explained. “My Mom gave it to me at my shower and it reminded me that I knew Michael had a needlepoint as well, so I asked his Mom if we could have it. When we opened it up, we were shocked. His needlepoint that his Aunt Annie made him for his nursery had the exact same characters. They actually looked like a set.”

Other items in the nursery include, furniture from Pottery Barn Kids, a 4moms mamaRoo baby seat and various Etsy finds.
Continue Reading

Tips for Getting Your Child to Eat Healthy

Beverley Mitchell & Kenzie Have a Playdate

Beverley Mitchell is Expecting Baby No 2