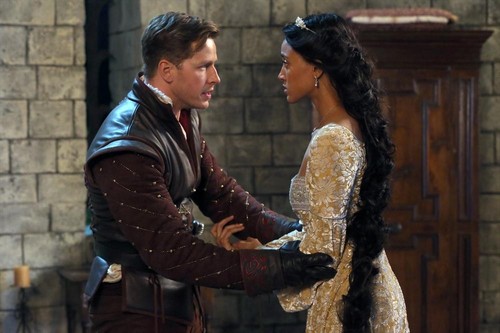 Our favorite fantasy drama ONCE UPON A TIME IN WONDERLAND returns tonight to ABC with a new episode called  “The Tower.”   On last week’s episode  Emma arrived in Storybrooke with Henry and reunited with her friends and family, only to discover that no one remembered how they were transported back – or the past year they had spent back in Fairy Tale Land. But Emma was sure that someone in town was responsible for this new curse and teamed up with Regina in an attempt to uncover their identity.

Meanwhile, in the Fairy Tale Land that was during the past year, Regina, with the aid of Robin Hood, attempted to break into her castle, which had been overtaken by the Wicked Witch.  Did you watch last week’s magical episode?  If you missed it don’t worry, we got you covered with a recap, right here.

On tonight’s episode while Emma, David, Regina and Hook continue their search for the Wicked Witch, she, in turn, is planning a dark surprise for David, and Zelena’s prisoner is powerless under her watch as she plots her next course of action against the townspeople. Meanwhile, in the Fairy Tale Land that was in the previous year, Prince Charming stumbles upon Rapunzel, who is trapped inside a tower, and must help her confront her fears in order for her to be free.

Tonight’s season 3 episode 14 looks like it is going to be as magical as ever so make sure that you tune in and also join us for our coverage for ABC’s hit show at 8:00 PM EST! While you wait for our live updates hit up the comments section and let us know what you think of the episode!

ONCE UPON A TIME SEASON 3 EPISODE 14 RECAP, CLICK HERE …

Olivia Wilde Looks Ready to Pop on Saturday Out