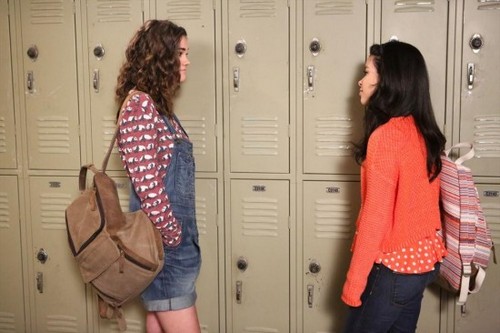 The Fosters ABC Family’s compelling drama continues tonight with a new episode called, “Kids in the Hall.”  On last week’s episode Callie sets her sights on a brighter future, and Stef had to make a decision that could threaten her job. Callie made a life-changing leap in order to better her future and earn back the trust of her loved ones. Brandon made a move of his own, much to Callie’s disappointment.

Stef was called to testify in Mike’s case and was faced with a decision that could mean losing her job. Meanwhile, Jude unraveled a mysterious message, and Mariana made a bold move to win Chase’s attention. – Brandon and Callie adjusted to new living arrangements. A scavenger hunt for Jude.  Did you watch last week’s episode? We did and we recapped it here for you.On tonight’s episode a good deed puts Callie in an awkward situation with a friend. Callie finds a way to use her photography skills for a good cause, but it unintentionally leads to trouble for someone she cares about. In an effort to clear his own conscience, Brandon makes a deal with an unscrupulous classmate and finds himself in over his head. Mariana deals with the unwelcome consequences of her stunt to earn Chase’s affection, and tension comes to a head between Jesus and Emma during a wrestling match. Meanwhile, Stef and Lena contemplate another big step for their family.

Tonight’s season 1 episode 17 is going to be an exciting one that you won’t want to miss, so be sure to tune in for our live coverage of ABC Family’s The Fosters tonight at 9 PM EST! While you wait for our recap hit the comments and let us know what you think of The Fosters season 1 this year. Check out the sneak peek video of tonight’s show below, while you wait for the recap!