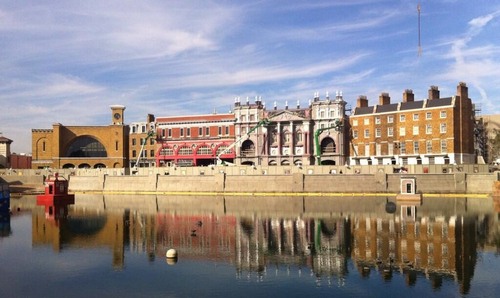 Celeb Baby Laundry was thrilled to be invited to a live webcast where Universal Orlando Resort released new details about The Wizarding World of Harry Potter – Diagon Alley, an entirely-new, themed environment opening at Universal Studios Florida this summer.  We of course just had to share all the details with you!

Children and adults will both love all the additions. During the webcast, Matthew Lewis (Neville Longbottom), Evanna Patricia Lynch (Luna Lovegood) and James Phelps (Fred Weasley) joined President of Universal’s creative team, Mark Woodbury to release the new details. They were joined by a few lucky families randomly selected at the park in Gringotts to provide an audience.

Matthew and James both asserted that the area was extremely authentic and fans will get a new experience. For Potter purists, Mark assured fans that J.K. Rowling played a large part in the creation of Diagon Alley. Jo even created a new area specifically for Universal! Click HERE for more info on Horizont Alley.

We learned a lot from the webcast and the new site Universal rolled out, but the focus was on the shop details and Hogwarts Express. Lynch was shown sitting in one of the compartments on the train. I was pleasantly surprised to see it was very true to the film and looked like a train instead of shuttle designed just for transport. Fans were assured that the train ride would be family friendly for all ages stating, “Anyone can ride the Hogwarts Express!” This will be a great break for little ones and a wonderful way for them to experience the adventure if they are two small for the bigger rides.

All the shops that will be functional (not just facade to feast your eyes on) were listed as: Madam Malkins for robes and costumes the kids will love, Magical Menagerie which will be abundant with stuffed animals from the films, a second Ollivander’s Wand Shop, Wiseacres for wizarding ware, Weasley’s Wizard Wheezes and Quality Quidditch Supplies.

The big news that came from the webcast was the confirmation of Knockturn Alley. I am curious to see how child friendly this area is. It is being described as a darker area where you will find Borgin and Burkes. There, you can shop for Death Eater masks and other “sinister” items. 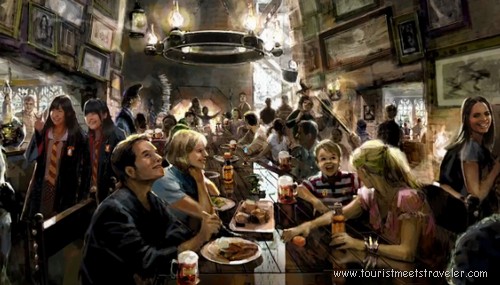 As far as feeding your family, park patrons will have the Leaky Cauldron which, according to rumor, is bigger than the Three Broomsticks in Hogsmeade. Mark noted that families enjoyed the shopping and dining experience just as much as the rides, so they focused efforts in those areas to please guests. I am also especially thrilled to hear that Fortescues Ice Cream will also be open and functioning! If you haven’t tried the Strawberry and Peanut Butter ice cream yet, do it at the shop Harry got free ice creams in ‘Harry Potter and the Prisoner of Azkaban.’

Not too much was revealed regarding Harry Potter and the Escape from Gringotts ride. It was confirmed that huge fire breathing dragon sits on the roof of the bank, but size requirements and things of that nature haven’t been addressed. I believe the ride is still being built so those details are still in the working stages.

Hogsmeade was also tweaked to accommodate guests needs. Honeydukes was expanded into Zonko’s. Items from the joke shop were moved to Weasley’s Wizard Wheezes according to Woodbury. This is fantastic news as I felt the shop was a bit crammed as I shopped for Chocolate Frogs. A place to eat my Cauldron Cake would be wonderful!

You can find more in depth coverage including details on the new site, the area created just for Universal’s Diagon Alley and even more details at Tourist Meets Traveler.