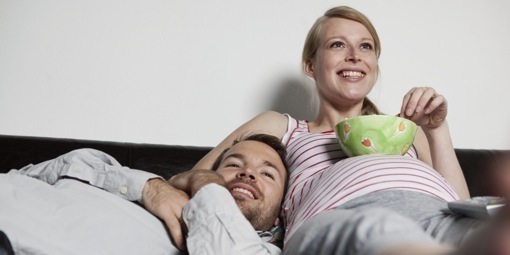 Who doesn’t love to snuggle into a Friday night feel good movie? You’ve probably been busy running around choosing a crib, doing your baby research or getting in that last yoga class. So here are some trailers for fun baby-bumping flicks to help you settle in for a cozy weekend of pre-parenthood bliss.

A successful, single businesswoman who dreams of having a baby discovers she is infertile and hires a working class woman to be her unlikely surrogate. (99 mins.)

In this sequel to “Father of the Bride”, family trouble continues to plague George Banks. Having survived his daughter’s marriage in the first film, he must now deal with her pregnancy. To complicate matters, his wife Nina is pregnant as well! (106 mins.)

Faced with an unplanned pregnancy, an offbeat young woman makes an unusual decision regarding her unborn child. (96 mins.)

For fun loving party animal Ben Stone, the last thing he ever expected was for his one night stand to show up on his doorstep eight weeks later to tell him she’s pregnant. (129 mins.)

When he finds out his longtime girlfriend is pregnant, a commitment-phobe realizes he might have to change his lifestyle for better or much, much worse. (103 mins.)

A look at love through the eyes of five interconnected couples experiencing the thrills and surprises of having a baby, and ultimately coming to understand the universal truth that no matter what you plan for, life doesn’t always deliver what’s expected. (110 mins.)

Having kids is not quite A Happy Event (Un heureux evenement) for one French mother in Remi Bezancon’s amusing, feel-good portrayal of the modern day baby blues. (107 mins.)

Life gets complicated for two high school seniors, Darcy and Stan when they become pregnant right before graduation.  (90 mins.)

As part of a fertility research project, a male scientist agrees to carry a pregnancy in his own body. (109 mins.)

A couple who is expecting their first child travel around the U.S. in order to find a perfect place to start their family. Along the way, they have misadventures and find fresh connections with an assortment of relatives and old friends who just might help them discover “home” on their own terms for the first time. (98 mins.)

11. Waitress. Starring: Keri Russell, Nathan Fillion, Jeremy Sisto, Cheryl Hines
Jenna is a pregnant, unhappily married waitress in the deep south. She meets a newcomer to her town and falls into an unlikely relationship as a last attempt at happiness. (108 mins.)

Jake and Kristy Briggs are newlyweds. Being young, they are perhaps a bit unprepared for the full reality… (106 mins.)

This 2010 documentary follows four babies from around the world (Namibia, Japan, Mongolia and California) during their first year of life.

Three bachelors find themselves forced to take care of a baby left by one of the guys’ girlfriends.

After a single, career-minded woman is left on her own to give to birth to the child of a married man, she finds a new romantic chance in a cab driver. Meanwhile the point-of-view of the newborn boy is narrated through voice over.

The life of super-yuppie J.C. is thrown into turmoil when she inherits a baby from a distant relative.

Save on Stylish Clothing For Your Teen This Holiday Season #HolidayDiscounts

Days Of Our Lives (DOOL) Spoilers: The Corruption Of Eric Brady!