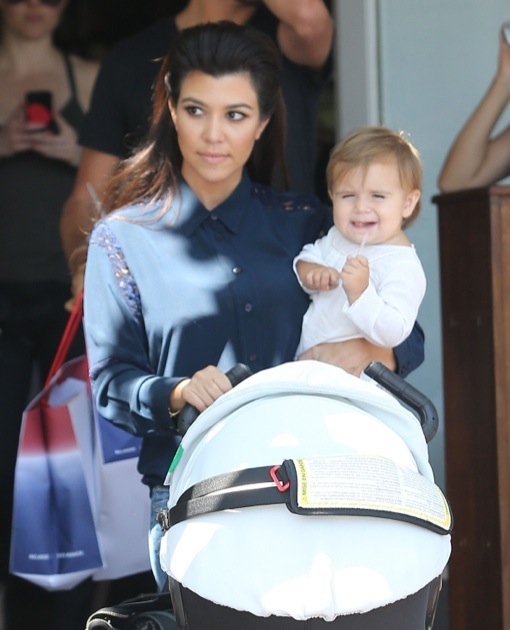 Kourtney Kardashian was spotted shopping at Barneys New York and Fred Segal with her daughter Penelope  in West Hollywood, CA on Thursday (Aug 1).

The Keeping Up With The Kardashians star sported a retro hairstyle while wearing a blue blouse and jeans. She pushed the 1-year-old in an Orbit Stroller.

The duo later met up with Scott Disick to enjoy a family lunch.

Earlier in the week, media reports emerged claiming Kourtney is pregnant with her third child.

“Yes, I’m Pregnant!” OK! magazine quotes the reality star as saying on the cover of their new issue.

The mom of two has been open about wanting more children. Before giving birth to Penelope, she told Scott, she would not be going on the pill again.

“I need to see what it’s like when I have two, but [having kids] is what life is about,” Kourtney responds. “I’m not going on the pill [after giving birth to Penelope]. I don’t believe in it anymore!”

Meanwhile, Kourtney’s sister, Kim is set to make her first appearance since giving birth on their mom, Kris Jenner‘s talk show on Friday.

Malin Akerman Touches Down With Her Baby Boy