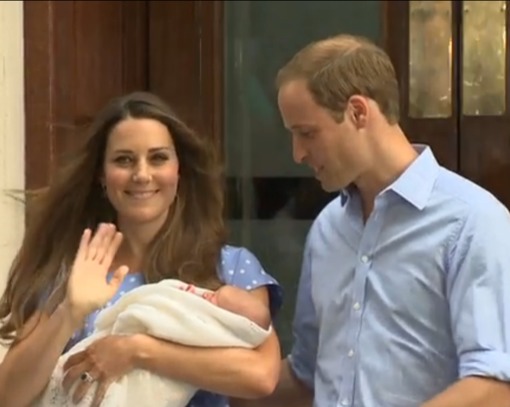 One day after welcoming their newborn royal baby boy, the Duchess & Duke of Cambridge made their first public appearance outside the Lindo wing of St Mary’s Hospital in London.

A smiling Kate affectionately held the baby boy while posing for photos. The baby was wrapped in a white blanket.

“He’s got her looks, thankfully,” Prince William joked to the press.

The family are headed home to Kensington Palace.

Baby Cambridge was born at 4:24pm on Monday.

“Her Royal Highness The Duchess of Cambridge was safely delivered of a son at 4.24pm. The baby weighs 8lbs 6oz. The Duke of Cambridge was present for the birth. The Queen, The Duke of Edinburgh, The Prince of Wales, The Duchess of Cornwall, Prince Harry & families have been told and are delighted. Her Royal Highness and her child are both doing well and will remain in hospital overnight,”Buckingham Palace said in a statement.

The new parents were visited by Kate’s parent, Carol and Michael Middleton on Tuesday. Later in the day, Prince Charles and Camilla Parker-Bowles made a quick visit.

“You’ll see him in a minute,” the new grandpa said after visiting his grandson for the first time.

The official name of the baby has not been revealed yet.

“We’re still working on a name,” Prince William told when asked the name of the future king.

Royal watchers expect the name to be released by the end of the week.