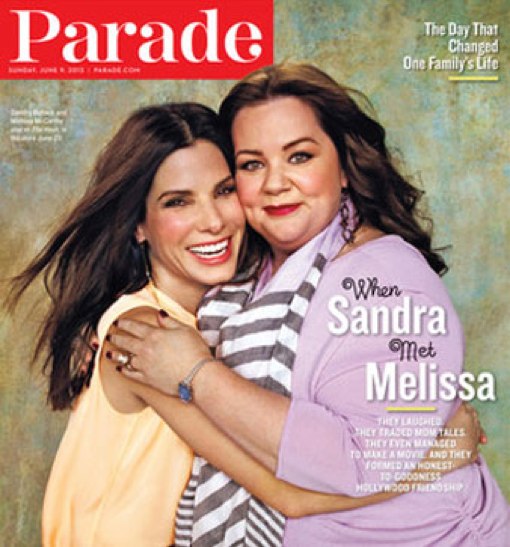 Good friends, Melissa McCarthy and Sandra Bullock appear on the cover of the latest issue of Parade magazine together.

The Heat costars open up about being mother’s and dealing with the their busy careers.

“I don’t know if I feel like a bad mom, but at the end of the day I’m always plagued with: Did I do enough? Should I go in a different direction?” Bullock, mother of 3-year-old son Louis.“But I also know that my entire life revolves around Louis.”

McCarthy who is mom to daughters Vivian, 6, and Georgette, 3 add that she feels guilty working.

“It plagues me. I feel intensely guilty for working … You have to be able to provide for your kids. But I feel like it’s a weird modern phenomenon that you always feel guilty for it.”

The two stars became close friends after bonding over their children while filming their new movie together.

“Having kids connected us on a deeper level,” says Bullock. “And the things we’re obsessed with outside of being a mom are the same, too: construction and house renovation … We’re kindred spirits in that world. If we had a beer den, with Barcaloungers — but our version of that — it’d be great.”

To read the full interview pick up the new issue of Parade.

Tamar Braxton And Vince Herbert Had A Boy