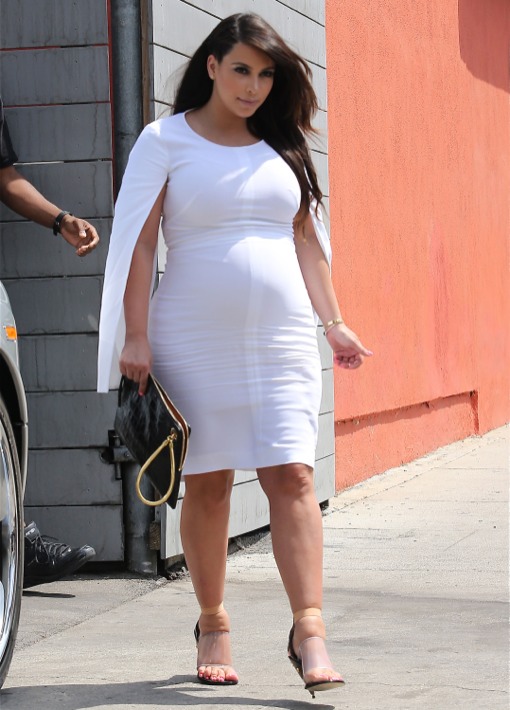 The Keeping Up With The Kardashians star was spotted sporting extremely swollen pregnancy feet while dining out with her mom Kris Jenner at Stanley’s in Sherman Oaks, CA on Thursday (May 16).

Besides wearing shoes that should be put away till she gives birth, Kim looked great in a white dress that emphasized her bump nicely.

News broke yesterday that the mom-to-be was furious at boyfriend Kanye West. Rumor is he is planning to go on an international tour to promote his upcoming album just three months after their baby is born.

“Kim is very unhappy that Kanye won’t be around as much because of his work. Even if she flew on a private jet with the baby to see Kanye, it would be impossible for mother and baby to be on the road with him. Kim wants to breast feed for at least the first six months. The baby needs to be on a schedule, and that is hard when crossing time lines,” a source told RadarOnline.

Although, TMZ reports that she and their baby will join the rapper on tour. Apparently, the touring company has been given orders to arrange for cribs and soundproof hotel rooms at every stop.