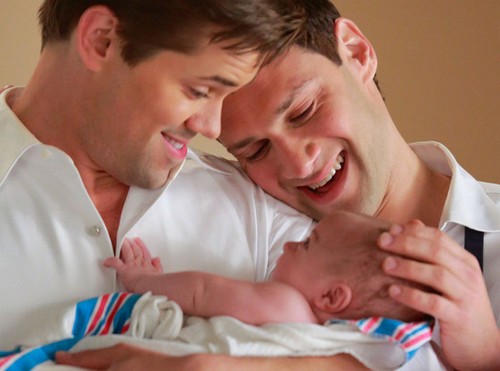 If you have not watched The New Normal, you are really missing a great show!  On the show Bryan and David are a Los Angeles couple and they have it all. Well, almost. With successful careers and a committed, loving partnership, there is one thing that this couple is missing: a baby. And just when they think the stars will never align, enter Goldie.  Goldie quickly becomes the guys’ surrogate and quite possibly the girl of their dreams.

Tonight’s double episode season finale is going to be great – on the first episode called, “Name That Newborn,”  Bryan and David are facing the hardest decision of their relationship, what to name their baby. The conflict prompts Goldie to reveal the origin of Shania’s name leading to brief identity crises for both of them. Later, While breezing through their wedding planning, David suggests that Bryan invite his mother Colleen, but her added opinion leads to more conflict and an unusual resolution. Meanwhile, Clay decides it’s time to let Goldie know how he feels, after receiving some unsolicited advice from Brice.

Directly following the first episode, the next episode airs, “The Big Day,” The wedding is finally here and despite all of the challenges that pop up throughout the day, Bryan (Andrew Rannells) and David (Justin Bartha) are dead set on getting married before the arrival of their baby, but their son has other plans.

The New Normal season finale double episodes air tonight on NBC at 9PM EST!  Don’t forget to tune in.  While you wait to see the episode, check out some photos of tonight’s episode below!