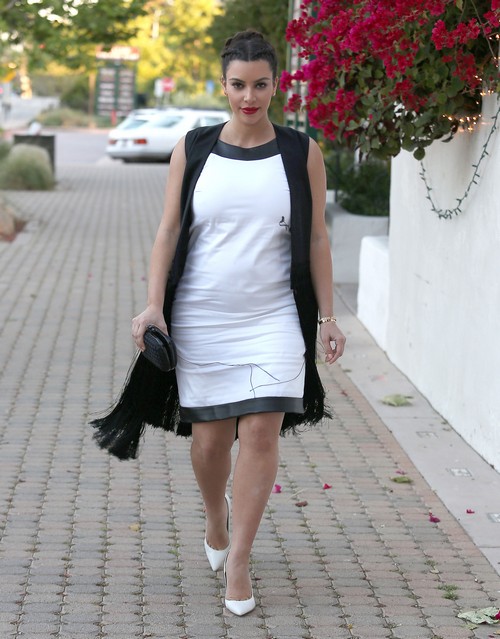 Kim Kardashian has revealed she’s been getting pregnancy and parenting tips from her older sister, Kourtney Kardashian. Kourt who already has two kids of her own – Mason and Penelope – has been giving the 32-year old starlet a helping hand on many things such as healthy diets and maternity wear outfit ideas, so it was only a matter of time before Kim would publicly ‘admit‘ how grateful she is to have a sister like Kourtney.

Kim has been going through ups and downs throughout her pregnancy. She still has three months to go, but her attitude has been so crap, it’s as if she she wished she never had a baby in the first place. We previously reported that Kim felt neglected by Kanye West who has rarely checked up on her as he constantly uses the excuse of recording a new album in Paris as to why he couldn’t be in LA with his girlfriend.

Kim has been very careful with what she has been eating now after she packed on a whopping 60lbs in just four months. The reality star is said to been feeling insecure about her body now that she could no longer fit into her designer clothes, but thanks to Kourtney’s good ol’ help, Kim managed to get her head straight.

As the family took to social media to congratulate their sister on her birthday, Kim wrote on her official blog by writing the following: “Happy Birthday Kourt! You have always mentored me even if you never knew it. You’re my big sis and I look up to you so much! I probably harass you now with all of the baby questions I ask you but it’s because you are so good at it. You are such an amazing mom, sister & best friend! I idolize YOU!”