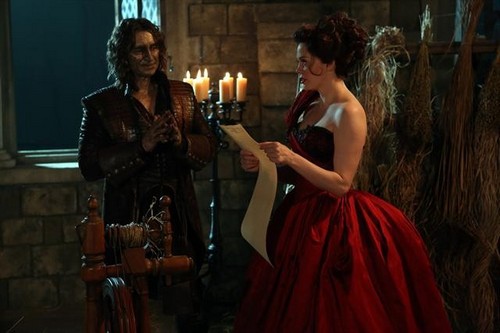 Our favorite drama-fantasy Once Upon A Time returns tonight to ABC with a new episode called, “The Miller’s Daughter.”   On last week’s episode when she discovered Cora and Regina’s plan to find and take possession of Rumplestiltskin’s dagger, Mary Margaret, with the aid of David and Mother Superior, made it her mission to find it first; and while Mr. Gold continued his quest in New York to reunite with son Bae, Hook devised a plan to rid himself of a crocodile.

Meanwhile, in the fairytale land that was, the Blue Fairy offered Snow White an unconventional enchantment that could help save her dying mother, Queen Eva.  Did you watch the last episode? We did and we recapped it here for you!

On tonight’s show Cora’s desire to rid herself of Rumplestiltskin in order to take his place as The Dark One takes one step closer to becoming reality as she and Regina try to overpower a dying Mr. Gold, and Mary Margaret is once again tempted by dark magic. Meanwhile, in the fairytale land that was, Rumplestiltskin agrees to offer his services to a younger Cora – for a price – when the king calls her bluff and orders her to actually follow through on her boast of being able to spin straw into gold.

So be sure to tune in for our live coverage of the season 2 episode 16 of Once Upon A Time — tonight at 8PM EST!

ONCE UPON A TIME SEASON 2 EPISODE 16 LIVE RECAP HERE!