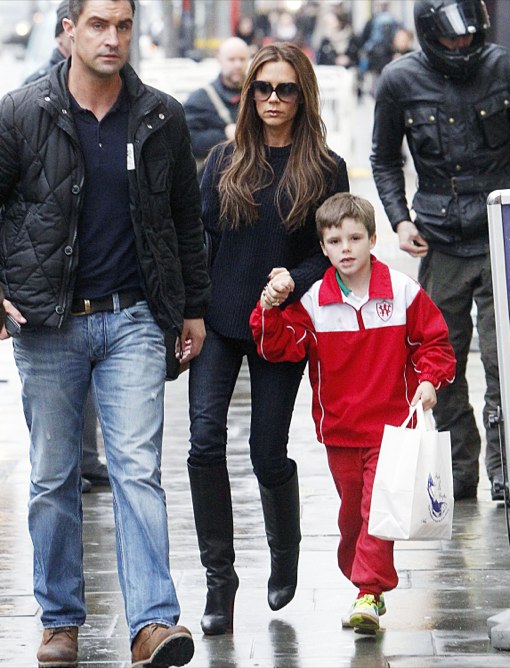 Victoria Beckham took her son Cruz for a traditional English lunch of fish and chips in Notting Hill area of London, England on Monday (Jan. 28).

The fashion designer looked chic in a black sweater, jeans and Christian Louboutin boots while ordering lunch in the shop. Cruz was dressed in a red soccer outfit.

In the March issue of Elle UK, Victoria opens up about why it was important for her to have her own career in fashion no matter how much hard work it took.

“When I was on stage with the Spice Girls, I thought people were there to see the other four and not me. And when I go out with David and people take pictures I think, ‘They’re here to take David’s picture,'” she explained of her soccer star husband.

“It was never my intention to prove anybody wrong. I wanted to prove to myself that I could do it,” she explained. “I don’t have to work, I need to work. All these people [her fellow fashion designers], they’re not just been given anything. They’ve worked hard. And I’ve never been given anything either. But I have a good work ethic; David has an incredible work ethic. I want my kids to have a good work ethic. I believe you can achieve anything if you work hard enough to get it.”