Sheryl Crow Bonds At The Beach With Her Boys 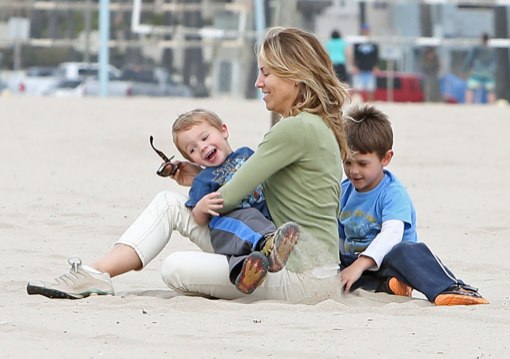 Sheryl Crow spend the day bonding wither her two boys Levi and Wyatt at the beach in Venice, California on Wednesday (Jan. 23).

The trio laughed and played in the sand before taking a walk by the water. After, Crow took them for a bike ride on the boardwalk.

The singer addressed her ex-fiance, Lane Armstrong‘s scandal in an interview with Entertainment Tonight this week after questions were raised about how much she knew about his doping.

“It’s got to be real hard walking around knowing you’re not telling the truth about something,” Crow told while trying to steer clear about how much she knew. “I always contend that the truth is the best way to go.”

She was interviewed as part of USADA’s investigation in 2011 though it is unknown what she said and she has not supplied an affidavit.

Crow started dating the athlete in 2003. They became engaged in 2005, but separated a year later.

Sheryl Crow Soaks Up The Sun In Maui