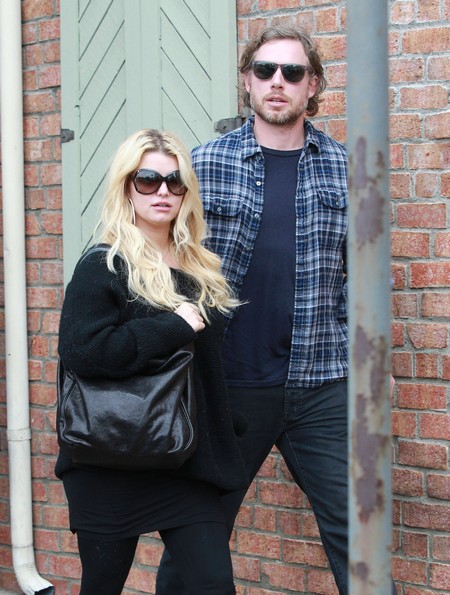 Now that Jessica Simpson has finally shed her baby weight – as a Mom myself, I can attest that this is quite a milestone – what’s next? Rumor has it Jessica’s getting a lot for Christmas this year! There’s a new baby on the way with fiancé Eric Johnson, even though little Maxwell Johnson is just seven months old. And now it looks like there’s a Hawaiian wedding in the works just in time for Christmas!

Since Jess so famously held onto her V card until she was happily married to then-hubby Nick Lachey, I was more than a little surprised when she turned up pregnant with baby #1 without being hitched. Popping out a second while still unwed may be okay for Kourtney Kardashian, but Jessica’s no Kardashian.

Jessica and Eric had planned to get married earlier this year, but she’s been distracted by lots of family and friend drama. First, news broke that dad Joe Simpson and mom Tina Simpson were getting a divorce and then multiple stories broke that the divorce was because former pastor Joe came out as gay to his family – Jessica and Ashlee Simpson included.

But happier news also interfered with planning her nuptials as well. Long time best friend CaCee Cobb is marrying actor and funny man Donald Faison (Scrubs) this weekend. Between being maid of honor for Cobb’s ceremony and diaper duty with Maxwell, it’s not hard to imagine why Jessica’s wedding keeps getting delayed.

But now it looks like a Christmas wedding in the Pacific is in the works. A source close to the couple says, “For the holidays Jessica and Eric are going to Hawaii and they’ve invited a lot of their close friends and family. No one quite knows what is being planned, but family members are speculating that they could be planning a surprise wedding.”

Jessica’s already had one huge wedding – complete with camera crew in tow – so a more private family affair in a tropical destination seems fitting. They’ve invited along friends and family from both sides and have told them they will be “making a big announcement” on the trip. Since the cat’s out of the bag about the new bun in the oven, a wedding seems like a logical conclusion.

The source says Jessica’s okay with her new baby bump showing in her wedding gown and just wants to be a wife before baby #2 makes its debut. The source says, “She just wants a relaxed and intimate ceremony and has been dropping hints that the big day could be right before Christmas.”

Looking back at Jessica and Nick from Newlyweds, who would have thought that he’d be married to Vanessa Minnillo with a baby of their own before Jessica was hitched again… Fingers crossed for Jessica’s big Christmas ceremony and a healthy, happy pregnancy. Maxwell’s going to be the world’s cutest big sis!