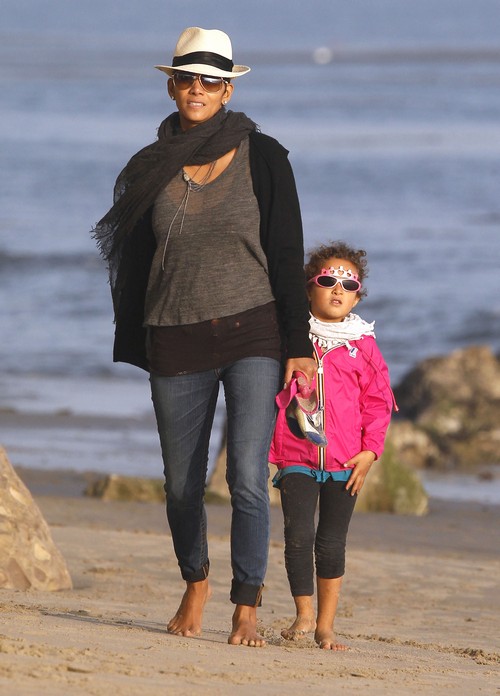 Halle Berry and Olivier Martinez have been bouncing around Paris over the holidays without Halle’s daughter Nahla Aubry. Halle’s ex Gabriel Aubry had their daughter over Christmas which left Halle at loose ends. She and Olivier took off for Paris and from the moment they touched down in the city of lights, Halle has been looking progressively more depressed. Olivier started their visit jubilant, waving his fist in triumph as they deplaned in Paris.

But today, when Halle was reunited with Nahla at JFK, she looked peacefully happy. She held her daughter in her arms and rested her cheek on her head. As Halle made her way through the airport, Nahla nodded off in her mother’s arms.

Neither Halle’s ex-lover Gabriel nor current fiancé Olivier was in sight at the airport, leaving a few questions open. Was it Gabriel who flew with daughter Nahla to New York to meet up with Halle for the parental swap or did a nanny take on the task? Are Halle and Nahla flying to Paris to meet up with Olivier? If not, where is Olivier and why wasn’t he with Halle at the airport?

Halle was seen dressed in the same black leather pants, low-heeled biker boots and mid-thigh black winter coat as she’s been wearing while sight-seeing in Paris with Olivier. Nahla was a vision in pink as she was carried through the airport – the adorable youngster wore a puffy coat in pale cotton candy pink, bright pink striped tights and pink fur-lined snow boots. Was the little girl bundled up to face the New York winter or the Parisian chill?

This must certainly be a better holiday for little Nahla than Thanksgiving when her future step-dad and dear Dad got into a brutal fistfight. One can only wonder what that poor child thought when she saw her Dad looking like a human punching bag. Post-fight, both sides rushed to get restraining orders and then just as suddenly, they reached a compromise and all legal actions on orders were abandoned.

Marcia Cross Skates The Day Away With Her Twins

Molly Sims Soaks Up The Cabo Sun With Brooks