Isla Fisher: “I Never Had Any Body Issues During Pregnancy” 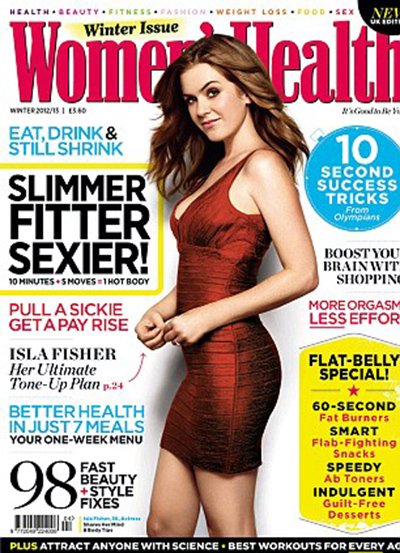 With her new movie Rise of the Guardians hitting theatres later this month, Isla Fisher has begun promoting the film by covering the December 2012 issue of Women’s Health magazine. The actress who stuns in a red mini dress on the cover opens up about her about losing the baby weight after having children, converting to Judaism to marry Sacha Baron Cohen and her career.

The mom of two admits she watches her weight, but losing weight after pregnancy wasn’t very hard because she breastfeed.

“I do watch my food. But I’ve been blessed in that I never had any body issues during pregnancy. I loved being able to eat whatever I wanted and the whole experience of giving life. And I never worried about losing the weight afterwards, because breastfeeding burns all the calories up so fast. Breastfeeding – that’s my big slimming secret! That and Spanx. Anytime anyone compliments me on my figure, I’m wearing my Spanx undies,” she tells.

The Australian born actress who is known for her beautiful looks insists she didn’t have a lot of confidence when she moved to Los Angeles to pursue her acting dreams.

“I never had the chutzpah to just come to LA and make it. I didn’t have that confidence. I’m always surprised when I get a job. I never saw this in my horizon.”

“After doing that [Wedding Crashers], I had 12 months where I was auditioning three times a day and I didn’t get a single job. That was a real low point. But with hindsight, those movies turned out to be awful, so I dodged a bullet. If I’d got any of them, I wouldn’t be where I am today.”

Moving to Los Angeles didn’t only propel her acting career, but also led her to finding her husband Sacha Baron Cohen. The couple married in 201o after Fisher converted to Judaism.

“It takes a couple of years of studying. I’ve always been really into family and food, so culturally it was the right fit for me.”

Although, the Wedding Crashers star has not forgotten her roots and keeps in touch with other Aussie natives.

”We can all do the accent really easily. And we all look great in a bikini. Including Russell Crowe – no one pulls off a bikini like Russell. I am sort of friends with them all. I just did a movie with Hugh Jackman [Rise Of The Guardians], and I catch up with Naomi [Watts] whenever I’m in New York.”

Be sure to pick up the new issue to read the full article.