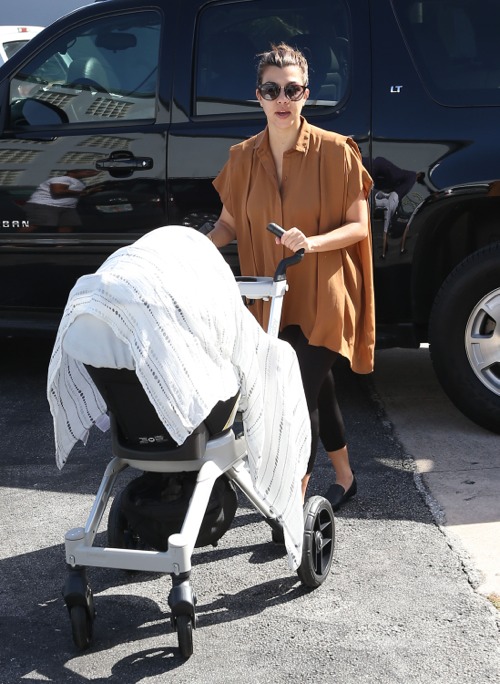 Kourtney Kardashian was spotted arriving at a photo studio with her daughter Penelope in Miami, FL on Wednesday. The reality star wore a flowing brown blouse with black tights and flats as she was helped out of her chauffeured car.  Penelope was covered by a white blanket while seated in her Orbit stroller.

“With Khloe Kardashian getting her dream job as an X Factor host, Kris Jenner thinks anything is possible now,” a “source close to the family” tells Radar Online.

“Because Kourtney Kardashian was more prominently involved with working on their Dash clothing label, Kris Jenner believes she should be on a show like Project Runway. Kim Kardashian is great in front of the camera, has lots of experience modeling and doing fashion shoots, so Kris Jenner is desperate for her to get involved as a judge on a show like America’s Next Top Model. Now that Khloe Kardashian has paved the way for her other sisters, Kris Jenner will do anything to push her daughters into following her lead,” Radar’s snitch added.

What do you think? Do you want to see more of the Kardashian’s on your TV?