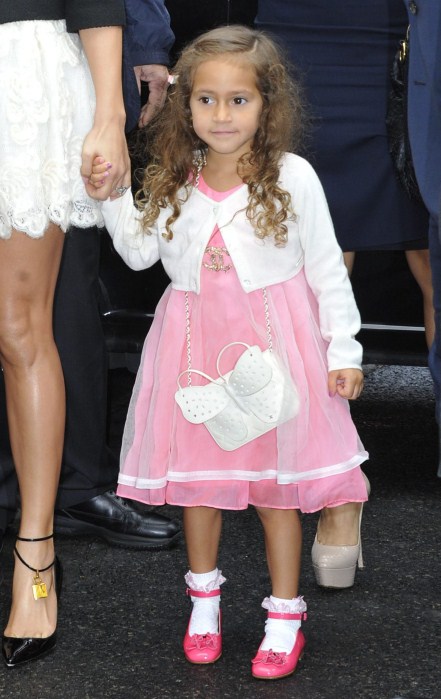 Jennifer Lopez‘s daughter Emme Muniz has made her bid to be the next fashionista in town.

The  four-year-old got one step up on other celebrity children competitors like Suri Cruise and Harper Beckham while attending the 2013 Chanel fashion show during Paris fashion week.

Not only did Emme attend her first fashion show, but she did so in style donning $24oo of accessories. The cute butterfly-adorned bag she wore around her next was from Chanel and goes for $2100.  She also wore a $310 Chanel brooch to complement her pretty pink dress.

So, is Emme the next little style icon in town?  Suri Cruise was taken out of running after mom Katie Holmes told all the top designers to take Suri off of their VIP lists and to stop sending her freebies.  The closest competitor is, Harper Beckham who is rarely seen wearing an outfit that costs less than $100 outfit.  Her favorite designers include Chloe and Stella McCartney all at the ripe age of one!

Emme attending her first fashion show in style also raises another question. Is JLO trying to push her daughter in the spotlight? Apparently, Lopez and Marc Anthony have been duking it out over Lopez’s desire for Emme and Max to break into showbiz.

“Jennifer is hell-bent on becom­ing a ‘mom-ager’ to little Max and his sister Emme,” revealed an in­sider. “But Marc is insisting they go to school like normal kids, and then when they’re 18, they can decide what they want to do with their lives.”

Lopez also wants to be the children’s manager.

“She told Marc that she’s perfect­ly capable of serving as the twins’ manager, and she can prevent any meltdowns on the order of Britney Spears or Lindsay Lohan, but Marc isn’t having it. He has dreams of his kids becoming rock­et scientists or teachers.”

What do you think of Lopez taking Emme to a fashion show? Do you think she trying to thrust her daughter in the spotlight?