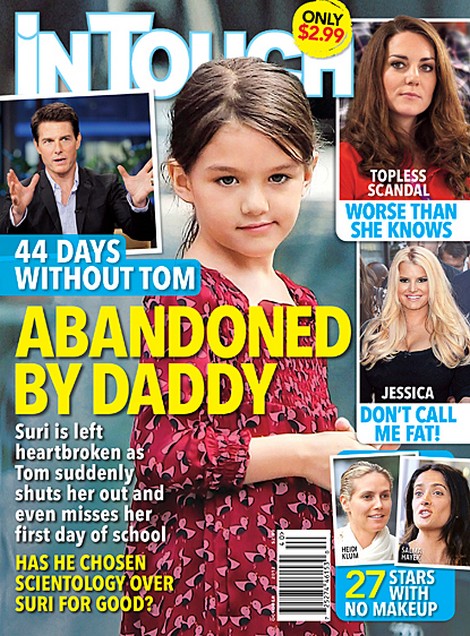 According to In Touch, Cruise  has not been pictured with Suri in over 44 days. The actor who has always made a point to show up for important events in Suri’s life in the past was noticeably absent for her first day of school.

“Suri Cruise  visibly nervous as she arrived at her first day of school – sticking close to mom Katie Holmes, who supported her as best she could. Noticeably absent was her father, Tom Cruise, who Suri hasn’t been photographed with in 44 days,” the magazine tells.

Instead of being there for his youngest daughter, Cruise was in London drinking with a group of pals.

“He was laughing and talking a lot to everyone,” says an onlooker, “like he didn’t have a care in the world.”

It is no secret that Scientology plays a role in every part of Cruise’s life and decision making.  Could Tom Cruise’s divorce agreement with Katie Holmes to keep his religion away from Suri Cruise be affecting his relationship with Suri?

Did Cruise choose Scientology over Suri? Tell us what you think!

Drew Barrymore: “I Can’t Wait Until I Have My Children”