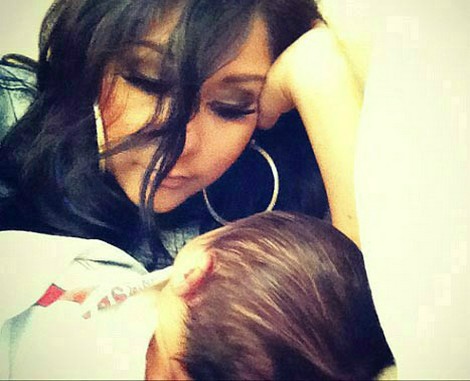 Nicole “Snooki” Polizzi  gave birth to her first child, Lorenzo Dominic LaValle, on August 26, 2012.  Today (September 15th, 2012) the self professed former partying hard drinking Jersey Shore actress, uploaded a picture of herself looking lovingly at her adorable new son to her Instagram account.  Along with the picture she put the caption, “I love you.”   It looks like Snooki is enjoying being a Mommy!

Snooki who is engaged to Lorenzo’s father Jionni Lavalle has said she is done with her partying life.  She said, “I’d rather stay home with our son. That’s fun.”  She will have plenty of time MTV recently announced that this is the last season for Jersey Shore.

Meanwhile, Snooki was spotted this week for the first time in public since the birth of her son when she resumed filming for her reality show Jersey Shore.  Snooki was looking as if she is already back to her former shape a scant three weeks after giving birth.  Snooki said during her pregnancy that she was going to avoid overeating and keep up a healthy lifestyle and it looks like it paid off!

What do you think of the picture of Snooki with her son?  Hit the comments and let us know your thoughts!