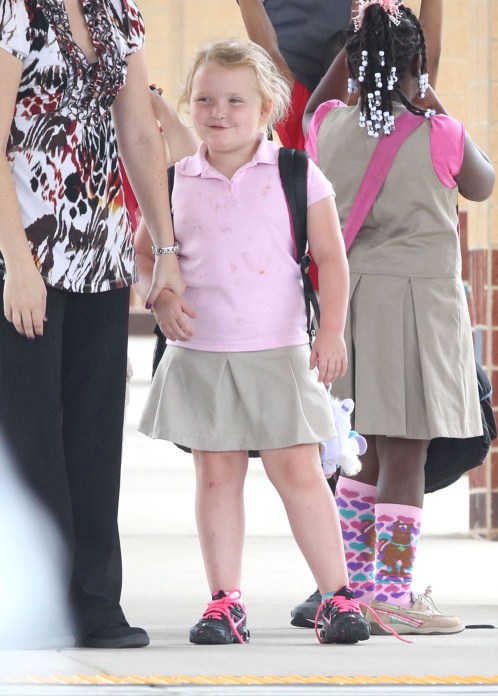 Alana Thompson was spotted waiting with her teacher for a ride home from school in McIntyre, Georgia on Wednesday.  The Here Comes Honey Boo Boo star wore a pink shirt covered in stains from a hard day at school.  One of her pink shoes laces of her Nike shoes was also left undone.

Last night, the latest episode of Here Comes Honey Boo Boo aired. The episode centered around Alana setting up a lemonade stand to raise money for her new pageant.  Alana reveals that her main ingredient is 5 lbs of sugar. June also makes the family favorite for dinner: sketti.

Honey Boo Boo may be a hit, but it was claimed last week that Kris Jenner the matriarch of the Kardashian family hates the show.  A source told Radar that Jenner claimed the show was “exploitative” and that the Thompson family is “classless, unlike her family and [she] can’t understand why America is so fascinated them.”

However on Tuesday, Jenner claimed the rumors she hates the show are ridiculous because she hardly knows who Honey Boo Boo is.

“I would never criticize her, because I don’t even really know who Honey Boo Boo is,” she told E! News.

She added that she had “never seen the show” was under the impression “Boo Boo” was a dog.