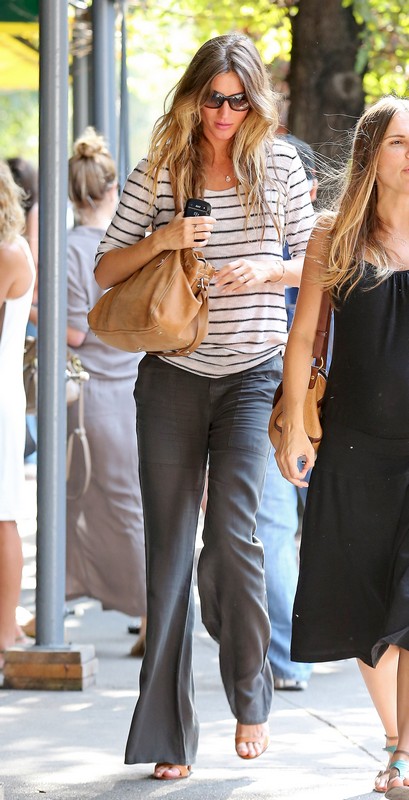 Brazillian super model Gisele Bündchen who is married New England Patriots quarterback Tom Brady was spotted feed her baby bump at Bar Pitti in Greenwich Village in New York, New York on September 14, 2012. Gisele  showed off her baby bump in a form-fitting striped sweater as she had lunch with friends.

This is the second child for Gisele and Tom they have a t-old son two-and-a-half-year-old Benjamin Rein Brady.  Their new child is believed to be due at the end of September.  Gisele who would love a big family has said she would love to have a girl but she has not found out the sex of her baby because she wants it to be surprise.  She source recently revealed, “She’s hoping it’s a girl – she loves little girls. But she wants to be surprised like when she had her first baby Ben.”

A couple of days earlier the two were spotted at a charity bowling event, the 3rd Annual Mayo Bowl.  The proceeds from the event went to Pitching in for Kids and the Boston Medical Center.

Enjoy 5 photos of Gisele having lunch with friends at the Bar Pitti in Greenwich Village in New York.