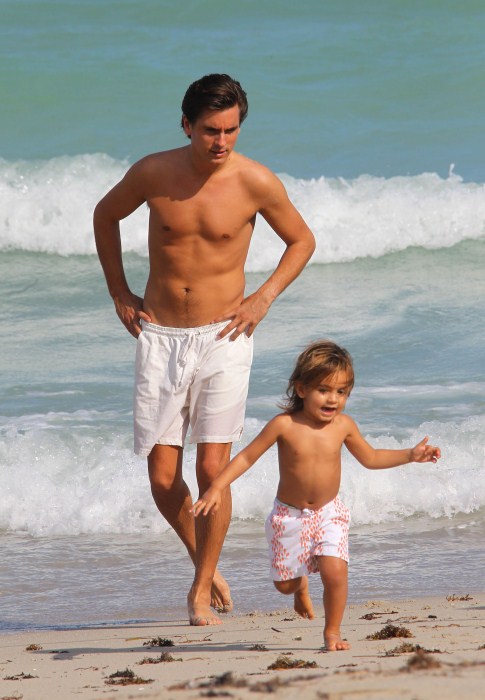 Scott Disick spent some quality time with his son Mason on the beach of Miami, FL on Tuesday. The Keeping Up With The Kardashian’s reality star wore white shorts as he played with Mason on the beach with a ball. Mason who wore white and orange board shorts looked to be having a fun time despite the ever present film crew filming his every move.

Earlier in the day, Disick and wife Kourtney Kardashian stepped out together while filming Kourtney & Kim Take Miami. The couple made sure to share an intimate embrace in order to squash rumors the two are on the rocks.

According to In Touch Magazine, Kardashian is sick of Disick’s bad boy ways and finally had it after he went to NYC to party with other women.

“He thought nothing of leaving Kourtney and the kids behind and flying to New York. It’s sad but typical,” an insider told. “He lied to everyone and said he was just coming to NYC to host a Fashion Week event, but that was far from the truth”

“He was hanging out with his guy friends and hit up Soho House. He tried to keep his whereabouts off the radar so he wouldn’t be photographed or piss off Kourtney,” the source added.

Jessica Simpson: “I’m Going To Let Maxwell Do What She Wants To Do!”