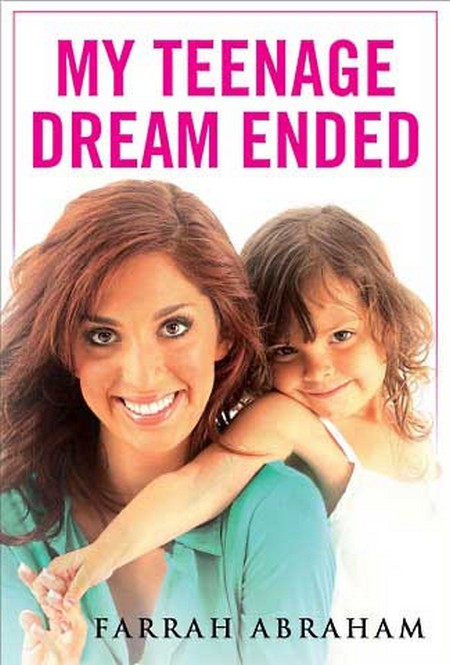 Someday, MTV will be casting for Teen Mom and no one will want to appear on the show because it seems to ultimately make life a whole lot worse for these girls.  Farrah Abraham is the latest to make news, as she has a book coming out entitled, My Teenage Dream Ended.  This girl has been through the wringer.  Her baby daddy was killed in a car accident while Farrah was pregnant, leaving the teen to deal with things alone.  About two months after her daughter Sophia was born, Farrah couldn’t handle things anymore.  She turned to coke and booze to dull her pain until the suicidal feelings took over. She spoke to In Touch Magazine recently saying,

“We hadn’t spoken in more than two months,” Farrah says about her ex-boyfriend in her book, “but crazily I had still hoped we had a future together.  All I could think about was killing myself.  And Farrah had a plan. “I figured I would drown myself in the bathtub — that seemed like the easiest way to go. I realized I was being selfish,” she says about her suicidal ideation. “The most important thing is making sure that [Sophia’s] well taken care of — how am I going to do that if I’m dead?”

Farrah has since been diagnosed with clinical depression and is doing better thanks to intensive therapy and medication.

I can’t help but feel like MTV is taking already rough situations and making them worse for these girls.  Do you think Farrah has really cleaned herself up?  Do we really need to read an entire book about her short life?  Tell us your thoughts in the comments below.

Ali Landry Takes Her Kids To The Doctor (Photos)