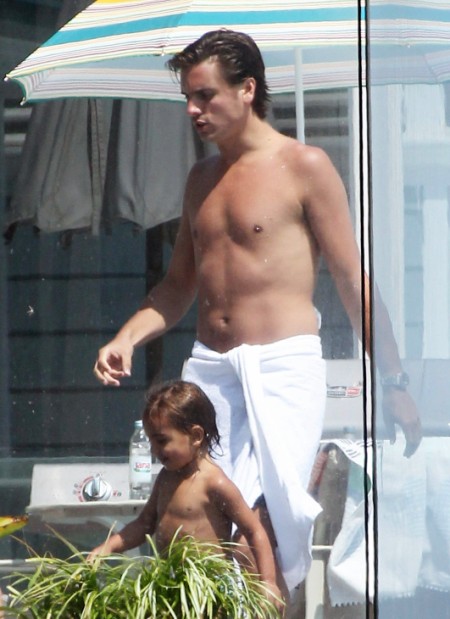 Scott Disick and his son Mason Disick enjoyed a day at the beach in Malibu yesterday. The two showed off their golden tans as they marched through the giant sandbox. Is that a normal diaper that Mason wore though or is it a special water diaper? It’s bothering me. Other than that, Scott and Mason looked like they had a blast! And I have to say, Scott’s looking pretty darn good lately. I know he turns a lot of people off with his careless, preppy attitude but I can’t help it. He’s kinda hot!

Scott took to his twitter account to talk about his bonding beach day with his son. “Had a great day in Malibu, now the lord is off to sleep.” Disick tweeted. But where’s Kourtney Kardashian? I haven’t spotted her since she gave birth to little Penelope Scotland a month ago. Is she working on her mother/daughter bonding time or just not ready for the spotlight yet? I wonder what Kris Jenner has to say about that!

Jessica Alba Takes Her Princess-Obsessed Daughters Out To Lunch