Halle Berry And Nahla Aubry Back To Work After Head Injury 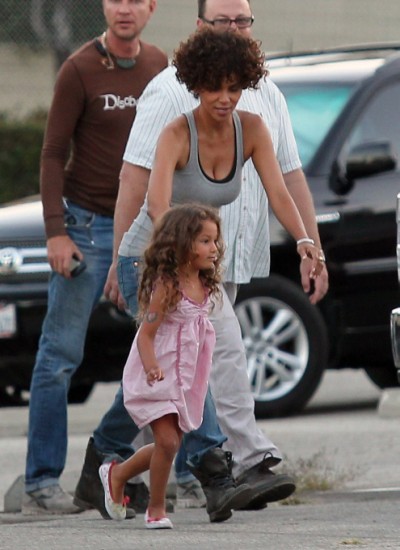 Halle Berry brought her daughter Nahla Aubry to the set of her movie The Hive in South Central, California yesterday. The mother daughter pair looked like they were having a blast in between takes. Though Halle’s look was questionable, Nahla was precious in her pink dress and glittery ballet slippers. I love the pic of Nahla hanging on to her mother’s leg like a little spider monkey. So adorable!

Things weren’t so funny a few days ago when Halle was injured while shooting a fight scene. She banged up her head and was taken to the hospital on Tuesday night as a precaution. There were no production delays, however, because the Oscar winner was back with her four-year-old less than 48 hours later. Maybe she brought Nahla for protection?

Reese Witherspoon And Baby Bump Keep It Casual At LAX

Pregnancy Test Dispenser In A Bar?!