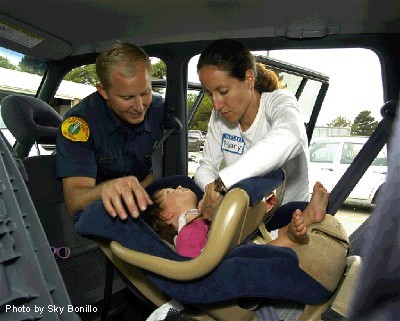 I was watching Teen Mom last night and one of the scenes really bothered me. Maci’s son Bentley was not in his car seat properly. His harness was way too loose and he could lean forward several inches. Now, I truly think Maci is a great mother, and car seat safety can often be over looked. Parents get too comfortable loading their child in the car seat, and feel like the seat is enough of a safe guard in itself. People also don’t take into account growth spurts, at which point the harness usually needs adjusting.

But common mistakes can lead to injury or even death, if in a car accident, and so here and on my personal blog I try to write a few articles with reminders and common car seat safety mistakes.

The most common error is a harness error. The harness should come out at or below the shoulders for rear facing and at or above for forward facing. It should also be snug. Place a finger under the straps when tightening and adjust until it is snug. You should not be able to pinch a fold in the material. The chest clip should be at armpit level at all times.

Bulky clothing, such as coats, are not safe to wear in the car seat as the extra material can cause the harness to be too loose to adequately protect your child.

Also keep in mind car seat limits. I know the kids want to forward face ASAP, but they must be at least two years old AND 20 lb before forward facing is safe. My son far exceeds these, but I have opted to keep him rear facing until he reaches the limitations of his car seat for height and weight.

Keep in mind that two years of age and 20lbs is a very bare minimum; children are MUCH safer rear facing for as long as possible. Research has shown rear facing in the second year of life to be 5 times safer than forward facing because they “spread frontal crash forces over the whole area of a child’s back, head and neck; they also prevent the head from snapping relative to the body in a frontal crash.”

Other things to keep in mind:

Be sure the car seat you are using is not expired. Many car seats expire after five years. Also, if you have been in an accident, you need to replace the car seat immediately.

Car seat safety can be a touchy subject, as no one wants to think that they are putting their child in danger. But it is a subject worth discussing if you see someone making a mistake. It can be the difference between life or death and nothing matters more than the safety of a the child.