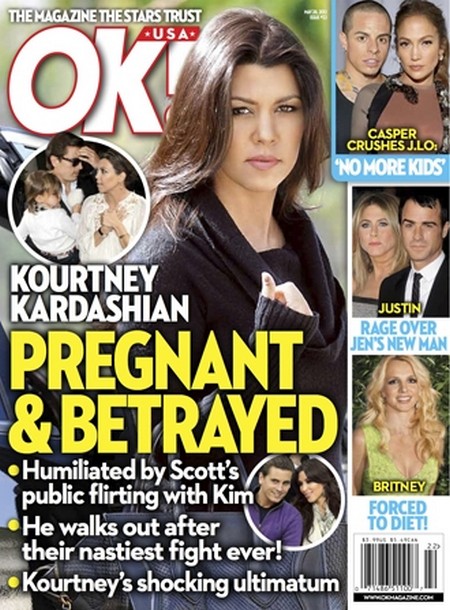 OK! Magazine magazine claims that Kourtney Kardashian who is pregnant with her second child with Scott Disick is humiliated by Scott’s public flirting with sister Kim Kardashian.  Her stress over his behavior has lead to their nastiest fight ever and Scott has walked out.

Scott planned Kourtney’s first baby shower and because of Kourtney’s mood swings, Scott spent the time in another room partying it up with a bunch of his buddies.

OK! has the scoop on the story: The 33-year-old reality star has been having a very tough time emotionally during her second pregnancy, swaying unpredictably between tears, anger and outright panic, says an insider, who adds that Scott has been bearing the brunt of her mood swings.

In a recent show of temper, Kourtney snapped and accused Scott of publicly humilitiating her by flirthing with younger sister, Kim, 31, (who was conspicuously absent from the party, opting instead to attend the White House Correspondents Dinner in Washington, D.C.)

The magazine suggests that poor Scott (hmmm) is the victim of Kourtney’s pregnancies hormonal imbalance, where her emotions are all over the page.  They are making her paranoid and she is even jealous of Scott and her sister Kim Kardashian.

So there you have the story, what do you think?  Hit the comments and let us know!

Charlize Theron And Jackson Touch Down After European Tour (Photos)