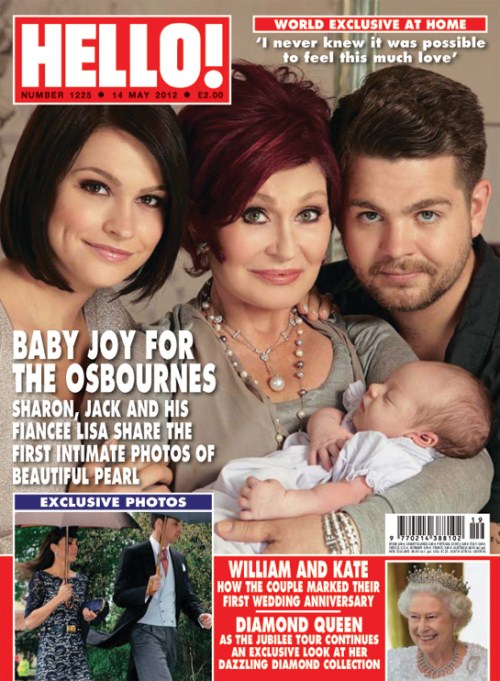 Jack Osbourne reveals his two-week-old daughter with fiance Lisa Stelly on the cover of Britain’s HELLO! magazine.  In the photo Jack’s mother Sharon holds Pearl while he and Stelly pose alongside.

In the interview the 25-year-old son of music legend Ozzy Osbourne tells that he instantly fell in love with with his newborn daughter.

“People say when you have a kid it’s like instant love, but unless you’ve experienced it, it’s impossible to comprehend. The moment I saw her I felt more love than I’d ever felt for anything. It was the weirdest, most overwhelming thing.”

However, he admits it took him a while to get his head around the news he was going to be a father. He and Stelly  had only been together for three months when she discovered she was pregnant.

“I think I responded with ‘That’s interesting’,” he recalls of the moment Lisa broke it to him. “What do you say? If we’d been trying for two years, of course you’d be like ‘Awesome!’ But we met in May and found out in August.”

“I told Lisa, ‘You need to give me a week to really take this in’. I had that time to get my head around the whole situation,” he added.

With his parents out of town Jack sought the advice of his former nanny, Melinda.

He and Lisa are now planning a small wedding later this year.

“It’s incredible to see Jack holding his baby girl, walking around so confidently,” says first time grandmother Sharon, 59. “He’s very nurturing and he and Lisa are so good together.”