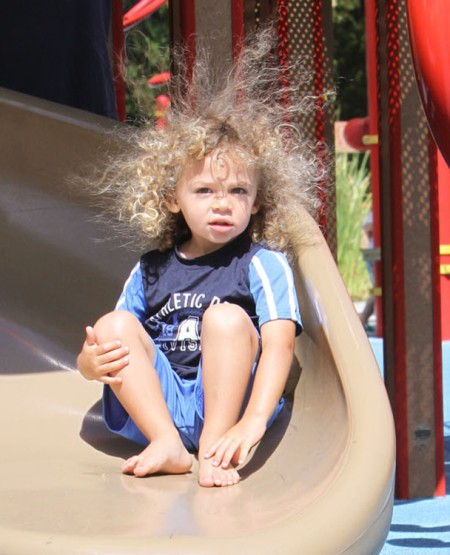 Hank Baskett IV was kicking it at Brandon’s Village park yesterday. The two-year-old reality star’s curly mop of hair took center stage as he explored the jungle gym. His famous parents, Kendra Wilkinson and Hank Baskett, were not with him though dad was definitely thinking about him no doubt. Hank was just interviewed for Parenting.com and was asked what pops into his head when he hears the word “dad.” The ex-football player said, “Role model. A child should never have to look outside his own home to find one.”

Hank also revealed his favorite memory of his son. “I was the first person to look Hank in the eyes the day he was born.”

That’s cute. And Hank Jr. has beautiful eyes! He’s going to be a heart breaker for sure, don’t you think?

David Beckham To Coach Kids When He Retires