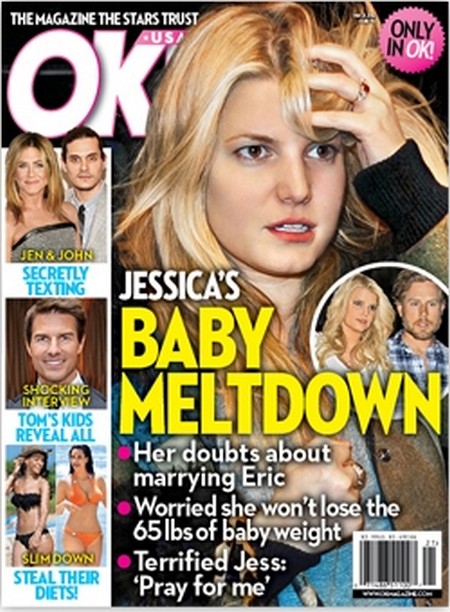 Jessica Simpson and her fiance Eric Johnson welcomed a baby girl named Maxwell Drew Johnson on May 1, 2012.  OK!  Magazine is claiming the pressure of losing the baby weight and getting back to work too soon is putting Jessica under horrible pressure.  Jessica whose new daughter weighted in at 9 lbs. 13 ounces is terrified that she will not lose the 65lbs she put on. Prior to her pregnancy, Jessica had always been under the constant glare of the media concerning her weight and Jessica is nervous that n0w that she has given birth it is all going to start up again.

They also claim that Jessica is worried about marrying Eric.  Jessica and Eric began dating in summer 2010 and announced their engagement in November 2010. Though they’ve been engaged over a year, the wedding hasn’t happened just yet.

OK has the scoop on the story: “The performer, who heads a fashion empire that reportedly grosses $1 billion a year and has a starring role on the reality competition show Fashion Star, may be cracking under the intense pressure to get back to work as quickly as possible — a situation that also upsets Eric, 32. He hoped that once their daughter was born, Jessica, 31, would take a break from her busy schedule.”

So there you have the story!  What do you think is Jessica feeling pressure now that she has give birth?  Should she marry Eric?  Hit the comments and let us know your thoughts.