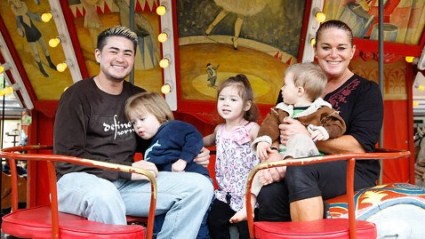 Thomas Beatie made headlines around the world when he became the first man to announce he was pregnant. We all remember those shots of a bearded Thomas in 2007 showing off his baby bump. Well there’s some sad news from the family this week – he’s separated from his wife of nine years Nancy Beatie. They have three children together.

According to People he revealed the breakup during a taping for the TV show The Doctors. Thomas said  ‘Like all marriages, we have our ups and downs, and we’re going through a rough patch right now. At the moment, we’re separated.’ He also admitted Nancy hadn’t seen the ‘new me yet‘. He was talking about undergoing his final female to male gender reassignment surgery. Beatie was born Tracy Lagondino in 1974. He legally became a man  – and changed his name to Thomas – after having surgery in Hawaii in 2002.

Thomas and Nancy welcomed three kids into the world – a daughter Susan Beatie and sons Austin Beatie and Jensen Beatie. They were born between June 2008 and July 2010. They were conceived by artificial insemination using donor sperm. 49 year old Nancy has two kids from a previous marriage. She was unable to have any more children when she met Thomas which is why he decided to get pregnant. In 2010 Guinness World Records recognized Beatie as the world’s ‘First Married Man to Give Birth‘.

The couple faced harsh criticism when they first went public in 2007. Death threats had forced the family to live in seclusion. They settled in Oregon.