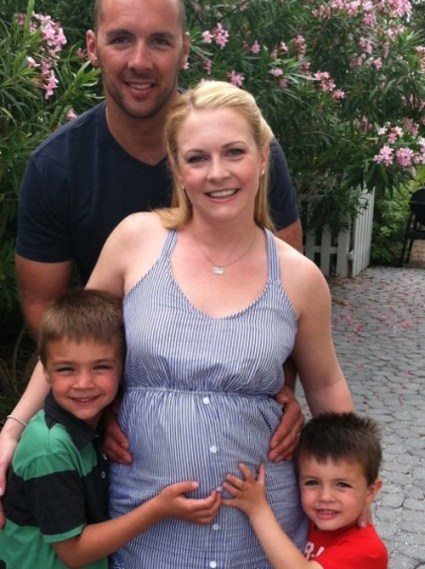 There were rumors the one time Sabrina the Teenage Witch was pregnant again and yesterday Melissa herself confirmed the great news via twitter ‘(Early) Happy Birthday to me! And baby makes 3!‘ She also tweeted this gorgeous family portrait showing a definite baby bump. Melissa married Mark in 2003. Mason Wilkerson was born in 2006. Braydon Wilkerson  arrived in 2008. So this baby will have two very protective big brothers. They’re already fascinated with their Mom’s growing belly.

Another baby for Melissa and Mark isn’t really a surprise. The Mom recently talked about parenthood and the possibility of having more kids ‘We definitely want to add to our family. We’re interested in adopting as well. We’re just starting to explore that.’ Melissa loves being a Mom. ‘Since I was little, I knew that I wanted to have children,” she’s said. “I’m the oldest of eight kids, and I have always liked the idea of a big family.’ She nearly has half a Brady Bunch.

So will we see one of her kids follow in her acting footsteps? ‘They have no idea what I do. They just know that Mommy goes to work. But Mason is definitely showing signs of wanting to be a performer of some sort‘ Melissa was a child star with Sabrina and of course Clarissa Explains It All in the 90s. She now stars on Melissa & Joey.

Madonna on Parenting: “I’m probably Not As Tough As I Should Be.”