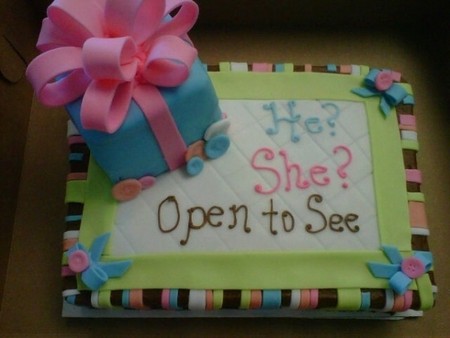 Cake already plays an important role in a lot of our lives; from birthdays, anniversaries to holidays. Now, mommies-to-be in the UK are following North American mommies-to-be, by having cakes at their baby showers that reveal the sex of the baby.  At the first slice, the cake reveals that the inside is pink if the mommy-to-be is expecting a girl and blue if it is a boy.

In the US expectant mommies have gone as far as have the doctor write the sex on a note, seal it in an envelope and ask the baker to open the envelope and be the only person to know the sex of the baby, beside the doctor, before the baby shower – even the parents-to-be are surprised.

Some people in the UK have the cake specially made with the secret sealed inside an envelope set between layers, but don’t coordinate with the color of the cake. I think it is much cuter to have the actual cake colored to represent the gender of the baby. If it were twins, let’s say boy and girl, you could do half pink, half blue. But some mommies prefer the anticipation of having to open the envelope, they don’t want everyone to know the gender at the first slice.

The “baby cake” trend is spreading like wild fire in the UK and many bakeries are now including them on their websites.

Now, besides this cute idea for revealing the sex of their babies, some mommies-to-be found it interesting to arrive at the shower dressed in the color to reveal the sex, pink or blue. In the US, the cakes have been so popular that the mommies-to-be are now calling the parties “gender reveal parties” and no longer a “baby showers”.

Back when I was pregnant with my boys, the question used to be “When is it due?”, time has obviously changed mommies-to-be, as the new question is now likely to be “Is it a boy or girl?”