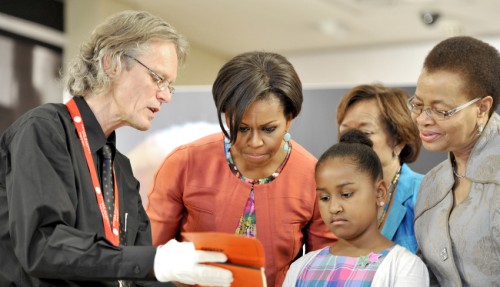 What? You mean not every tween girl is clamoring to paint their toenails in the Lincoln Bedroom?

According to First Lady, Michelle Obama, it would appear so. She said the White House isn’t the most popular sleepover suggestion for her daughers, Sasha and Malia, and their friends.

“My kids are like every other kid in the sense that everybody else’s house is more interesting than their house,” Obama said Thursday during a Take Our Daughers and Sons to Work Day roundtable with women’s online outlets for her Let’s Move!  initiative. “We do sleepovers, but [The White House] is not their first choice. I thought I would have kids over every weekend so it’s surprising.”

I would go easy on them Michelle, Secret Service agents can be pretty intimidating!

But what’s not so surprising to the First Lady is the fact that, although her daughters idolize Beyonce, they still look up to their parents as role models.

“I think in the end our kids look up to us, first and foremost, whether they admit it or not,” she tells People magazine. “We are our kids’ first and best role models … Everyone else is just a symbol of something. You don’t really get to know them well enough to idolize them or to have them impact your lives unless you’ve had a unique experience….My girls love Beyoncé. They’ve met her, but they don’t know her. They think she’s cool, they love dancing. She seems like a good mom. They’re rooting for her, but they know me. So I think for them, that’s why I’ve got to have my stuff together.”

The world waits and twitters for Jessica Simpson’s baby