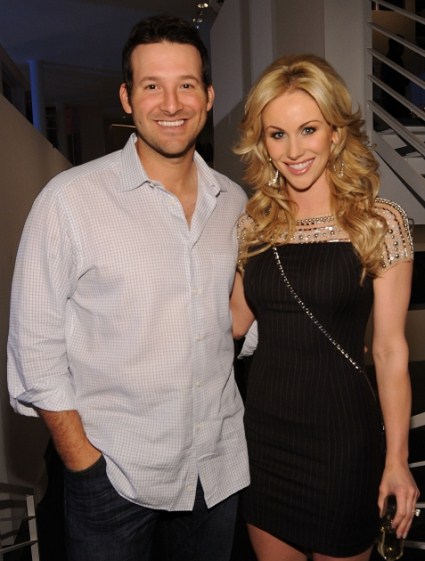 Congratulations to Dallas Cowboys quarterback Tony Romo and his beautiful wife Candice Crawford. They are the proud new parents of a boy Hawkins Crawford Romo. Their bundle of joy arrived on Monday in Dallas, Texas.

I think Tony’s team is almost as excited as the first time parents. Club Spokesperson Rich Dalrymple confirmed the news in a statement ‘Hawkins Crawford Romo is now a part of the Dallas Cowboys family. He came into this world on 4/9/12 at 5:30 p.m., 8 lbs. and 8 oz. All is well with mom.’  The team also jumped online and tweeted their best wishes to their star player ‘Congratulations to Tony Romo, proud papa‘. Tony is looking forward to spending some quality time with his son before he heads off to team activities next month. The birth was well timed!

This is baby number one for the sportsman and his wife who is a sports journalist. They married just under a year ago in May 2011. The pregnancy was announced in October. Candice is the sister of Gossip Girl’s Chace Crawford …so little Hawkins has a few famous faces in the family. Although I’m sure Dad would love to see him follow in his footsteps and get out on the field.

Of course Tony’s ex is singer and actress Jessica Simpson who’s also about to join the parenthood club. The pair dated a couple of years back after her split from husband Nick Lachey. Jessica is due very soon. We already know she’s having a girl with fiance Eric Johnson.

Megan Fox: Step-Son “Kassius Is One Of The Most Beautiful Things About My Life.”