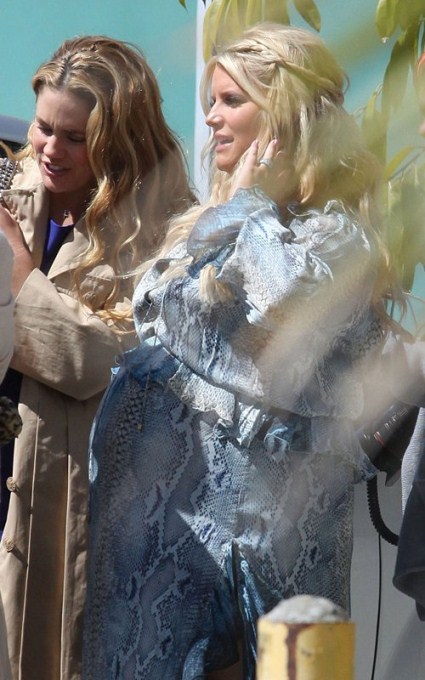 Jessica Simpson was joined by family and close friends for her baby shower on the weekend. The very pregnant singer celebrated with younger sister Ashlee Simpson as well as famous pals Jessica Alba and Ellen Pompeo in Los Angeles on Sunday. The mom-to-be was glowing in a long light blue dress. Her baby bump is so big there’s no hiding it anymore!

So what do we know about the get together?  An insider has told US Weekly ‘It was a kid friendly shower with many of her friends bringing babies. Jessica [Alba] brought her baby Haven, 7 months, and Ashlee brought Bronx, 3‘. Ashlee’s ex Pete Wentz was also spotted at one stage. And how was the baby Mama holding up? ‘Jessica looked pretty and very happy‘.

The only blue at the baby shower was Jess’s dress. We all know she’s having a girl so there were no blue decorations just lots of girlie stuff. The theme was pink and yellow. The insider also says ‘she received tons of gifts mostly wrapped in pink gift wrap and boxes. There were several books, stuffed toys and clothes among other items.’

Jess is well and truly into the final stages of pregnancy. She should be welcoming her little bundle of joy with fiance Eric Johnson any day now. It’s the first child for the couple. While Jessica’s first husband is also getting ready to jump into parenthood…Nick Lachey and Vanessa Minnillo are expecting their first baby later in the year. I wonder if Jess will get an invite to that baby shower?

How Did January Jones Lose The Baby Weight?