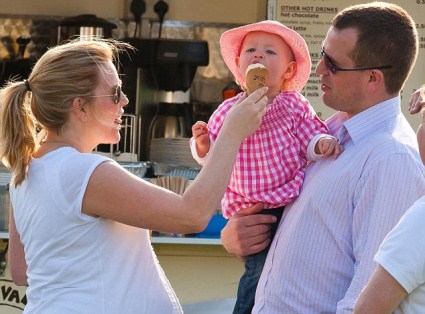 This adorable little girl in the pink gingham top, straw hat and denim jeans and enjoying an ice cream is the Queen of England’s first great grandchild. Her name is Savannah Phillips. Her parents are Peter Phillips and his Canadian born wife Autumn Phillips. Peter is the son of Princess Anne.

The gorgeous toddler is seen here enjoying a family day out at the Gatcombe Horse Trials in Gloucestershire. She’s now 15 months old and just about to become a big sister. 33 year old Autumn is due to give birth to the couple’s second child in the next week or so. This was a fun day out spoiling Savannah before her sibling arrives and everything changes.

You rarely see Peter and his family despite the fact he’s not far down the royal chain given he’s the Monarch’s grandson. Peter and Autumn happily take a back seat letting his cousin Prince William and the Duchess of Cambridge enjoy the spotlight. But at this stage their little girl is the only great grandchild Queen Elizabeth has  – so she has a special relationship with Her Majesty. The tot is also close to her Aunt Zara Phillips.