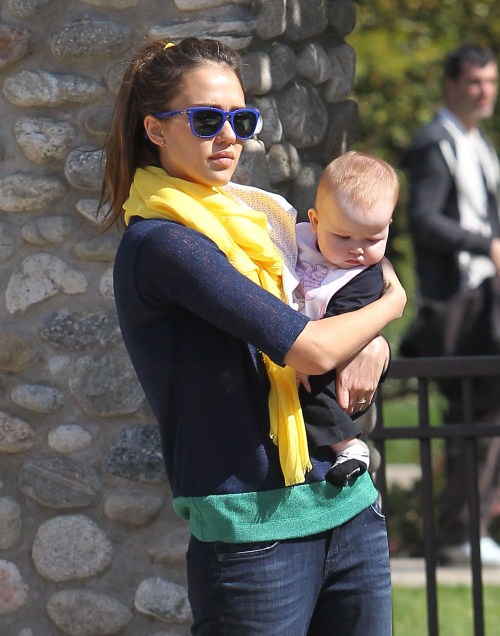 Jessica Alba admits she wears scarves to hide yto hide the messes that come with motherhood.

“I wear scarves, mostly because it’s an accessory that can dress up an outfit, but it’s also because if my baby has an accident – and I’m holding the baby – I can cover that accident up! So I’m not walking around with a big puke stain or poo stain on my shirt.

“Knowing that I don’t have time to go home and change, and really, I don’t have the space, time, or capacity to pick out five different changes of outfits for my car – it’s enough to remember my baby’s change of clothes.”

Alba who gave birth to her second child Haven Garner 7 months ago says she is finding the second easier than the first.

“I think going from no kids to one kid was the biggest adjustment. Once my older one was out of diapers and was a little bit more self-sufficient, I found that having another one was easier than it would have been if I had two in diapers,” she told US Weekly.

“I think the toughest part is probably just your time. You still want to spend time with both of them and you find you have less time for yourself. Once [Honor] is down for her nap then I have the baby and I get to spend time with [Haven], where I used to be cooking or doing emails or reading or talking to a girlfriend. So now it’s about organising my time and trying to be as efficient as possible.”

She added: “You know you’re a mother when you don’t sleep anymore!”