BabyBumpBUZZ: A Glowing Uma Thurman Shows Off Her New Belly 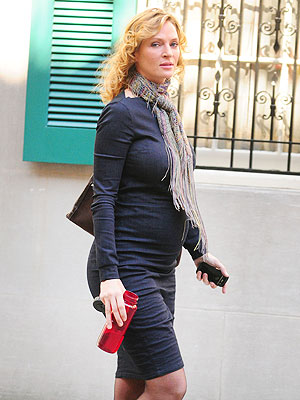 As CBL reported several days ago, 41-year-old actress Uma Thurman recently revealed that she’ll be having a baby with her on-again-off-again boyfriend of four years, Arpad Busson.

The actress was spotted recently in New York City flaunting her lil’ baby bump while on her way to a prenatal checkup. She wore a tight, fitted dress that accentuated her growing child and had her neck tightly wrapped in a multicolored scarf.

The actress is scheduled to appear in a 5-episode arc on the new show Smash, NBC’s new drama featuring two characters vying for roles in a Broadway show.

Have a happy and healthy pregnancy, Uma! What do you think of Uma Thurman’s pregnancy? Let us know in the comments section below, and don’t forget to tell us how you think the glowing mom-to-be looks with her new cute lil’ baby bump!